By: William C. Head, DUI Lawyer explains how Field Sobriety Tests are designed for the individual to FAIL!

The three-test battery of standardized field sobriety tests used by police investigating a DUI suspect fall into two categories. One is a psycho-physical test (the HGN eye test) and the other two (walk-and-turn and one-leg-stand) are divided attention tests. None of the 3 police tests prove sobriety or lack or sobriety, which is your starting point of debunking the NHTSA field sobriety test “battery” of roadside evaluations.

The original 1977 studies of Burns, Moskowitz, and others in the Southern California Research Institute analyzed about a dozen divided attention tasks, but Dr. Burns saw a need to use SOME other type of roadside evaluation to be able to claim a higher degree of precision and accuracy for police to make their arrest decisions. So, she gathered information on the horizontal gaze nystagmus test, which is based on physical changes in the eyes that CAN be caused by alcohol, at certain BAC levels. The medically-based test was added to the 3-test battery, in 1981.

Don’t Attempt Roadside Tests that are Designed to Fail

At a roadside pullover for a traffic ticket or at DUI checkpoints, no medical doctor or eye doctor examines you or measures the extent of any nystagmus. Neither does anyone with a medical background quantify horizontal gaze nystagmus (or vertical gaze nystagmus) for predicting a patient’s BAC alcohol level. When suspected of drunk driving or drugged driving, that driver will be aggressively asked to participate in roadside screening tests, NONE OF WHICH is mandatory. By asking to FIRST speak to a lawyer, you can stymie their efforts, but police know that you can WITHDRAW the request for an attorney, and some keep trying to get you to self-incriminate.

Yet, if a detained person does not exercise his or her constitutional right to remain silent and to NOT participate in ANY roadside tests, then he or she is HELPING police get a conviction. All that is required from you is NAME and ADDRESS. Knowledgeable criminal defense lawyers tell their clients to exercise all of the constitutional protections that both the federal US Constitution and the remarkable state of Georgia Constitution provide to us.

Your well-trained DUI attorney will tell you that police officers use this DUI screening evaluation in their quest to bolster a questionable DUI arrest decision. The subjectively-graded evaluations will be a major part of your prosecution for driving intoxicated, which is called DUI less safe GA. This “unscientific” guesswork by police of DUI field test results is virtually unregulated and has no role except to try to justify a DUI less safe arrest. In the overwhelming majority of drunk driving arrests, the HGN test is flawed, due to a variety of shortcomings. 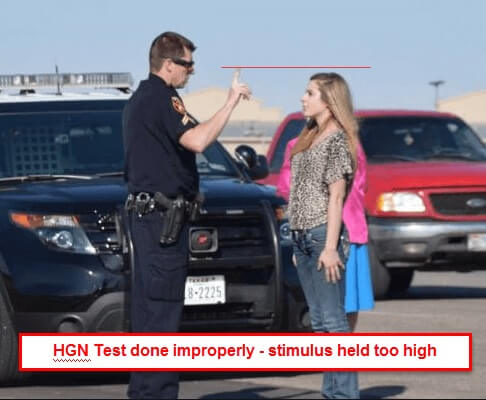 A fully trained DUI lawyer, with vast experience in debunking the field sobriety test procedures, has the best chance to beat a DUI that is dependent on a jury accepting field sobriety test evidence. This is critical since Georgia appellate cases allow the State to win a driving under the influence case (called “Georgia DUI less safe”), based primarily upon these inherently-unreliable, flawed, so-called “sobriety” roadside tests. Georgia law permits this as being justified by you WILLINGLY participating. This pro-prosecution stance of our appellate courts has endured over three decades of litigation, despite the fact that field sobriety tests are in NO WAY correlated to driving impairment.

Your DUI attorney will seek, at pre-trial motions or trial, to neutralize field sobriety tests. This effort at a trial may require one or more DUI expert witnesses to convince the judge or a jury of the “junk science” being touted by police officers. So, when your drunk driving lawyer advises that this is the route you need to go, pay for the expert or experts who are needed.

A DUI law firm that specializes in DUI defense is the answer. Atlanta DUI lawyer Bubba Head, along with his partners Larry Kohn, DUI attorney Atlanta, and ex-cop Cory Yager, the third DUI specialist law partner, is also a skilled drunk driving defense lawyer when it comes to aggressively defending a DUI in Georgia.

Five (5) major causes of the gaze nystagmus test of a DUI suspect’s eyes not being RELIABLE to prove DUI include these critical flaws: 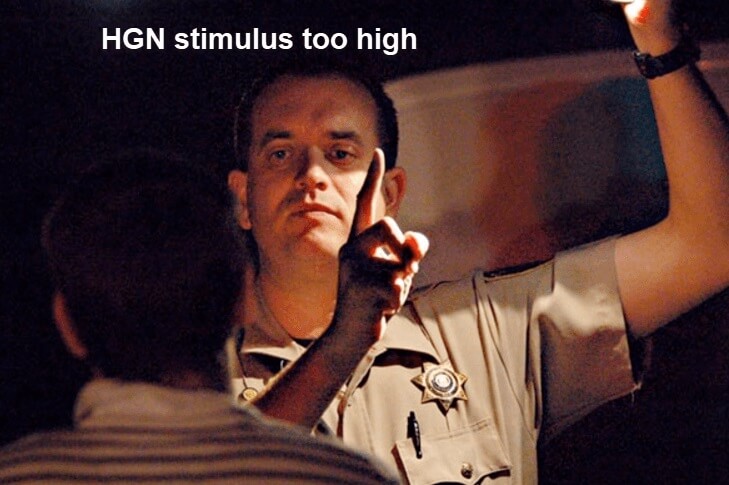 Prosecutors in most of the larger prosecutor offices are required to take the NHTSA field sobriety test 20-hour practitioner course.  Once they take the course, they must attempt to do these “passes” for the HGN test, just like officers learn to do them.  It is far more detailed and difficult than you think TO DO IT CORRECTLY. For our DUI attorneys, having this advance level of field sobriety test procedures is a major key to knowing how to beat a DUI.

The second thing they learned in training is that (when done in a standardized and precise manner) the HGN test (which is nicknamed “the DUI eye test”) is THE MOST ACCURATE indicator of the three standardized field sobriety tests.  The 1977 study put the accuracy rate for each NHTSA standardized evaluation (predicting who was 0.10 grams percent or more) at:

The raw data produced from this study, however, does not support these reliability rates, since both false positives and false negatives were not all factored in. Controlled studies by medical eye specialists (Dell’Osso and others) have proven that more than forty-five OTHER horizontal gaze nystagmus causes can be present, and “fool” the officer into believing that what he or she is seeing is alcohol nystagmus, to the exclusion of all other possible sources of gaze nystagmus.

For non-scientists, finding test errors is more complicated than you think

Dr. Greg Kane, MD, has written extensively about how an innocent person can be arrested and falsely convicted due to “bogus” mathematics being claimed by the field sobriety tests, in the Burns and Moskowitz studies. Most DUI attorneys have never heard of Dr. Kane, or his great website, www.sfst.us. He is very passionate about debunking fake science.

Performing the three SFSTs 100 times allows a scientist to show the correct answer, and what degree of ACCURACY exists for X percent of the time. That’s what NTHSA teaches DUI law enforcement officers. Accuracy is more complicated than this answer claims to prove.

Below is a Field Sobriety Test accuracy table from NHTSA’s original 1977 “scientific” divided attention tests validation project, Psychophysical Tests for DWI Arrest 1977. The labels used here, by Dr. Kane, are more logically named. In this project each person tested had two TYPES of readings (measurements) collected: a blood alcohol measurement via a breath alcohol test device and from Field Sobriety Test performances. The question at issue boils down to, “what percent of the time did the field sobriety test measurements correctly predict the alcohol measurements?” The answer to that question will be the accuracy of the standardized field sobriety tests when done PRECISELY in accordance with standardized procedures.

Note the TARGET of the field sobriety tests is alcohol measurements, meaning whether or not the person is at or above the legal alcohol limit. These roadside evaluations do not and cannot predict or detect “impairment by ethanol (alcohol) ingestion. In this legal seminar presentation, Dr. Marcelline admitted that the field sobriety tests DO NOT prove impairment, and cannot (in any way) tell which test subjects had certain BAC concentrations. Yet, police officers are constantly trying to claim that the “clues” or “cues” indicate IMPAIRMENT. This is false, and your DUI attorney should object and have that bogus testimony stricken from the records.

The table below sorts the people tested in 1977 by the test result. Look under the pink label FST coordination test. People who failed the FST were counted in the Fail ↓ column. People who passed were counted in the Pass ↓ column. Over on the side graph, people whose measured alcohol was high went in the ALCOHOL high → row. People whose alcohol was low went in the ALCOHOL low → row. Tables like this set up True Positive, True Negative, False Positive, and False Negative results in a way that makes it easy to answer important questions about this FST. 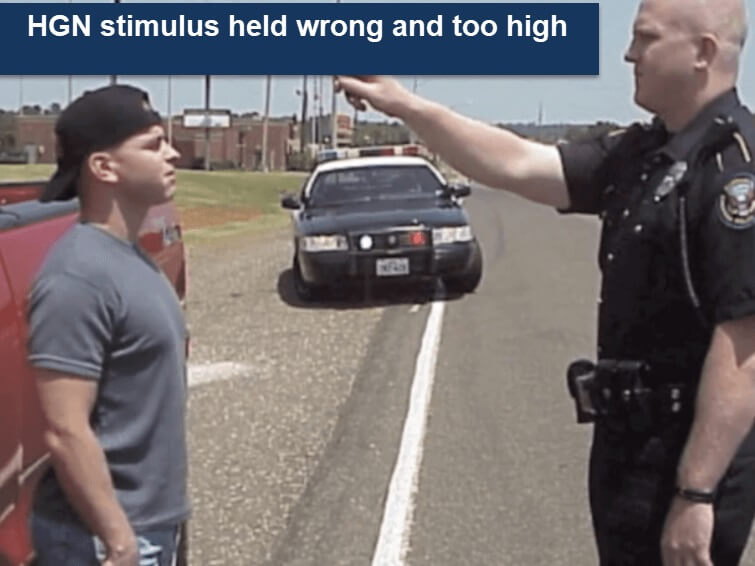 Dr. Spurgeon Cole, Ph.D., an expert in “testing and measurement,” co-authored a 1994, peer-reviewed scientific article, in which he showed how divided attention field sobriety tests have a 46% false positive rate, which is virtually the same percentage (47%) that Dr. Burns’ team had (47 of the 101 “false positive” tests in the 1977 California study. The Cole study used experienced law enforcement officers, with nearly 12 years as their median level of experience.

Plus, only the HGN is a “psychophysical test,” and the other two (WAT and OLS) are divided into attention/balance tests. So, if a person “looks okay” on the WAT and OLS, and the HGN test is excluded from the trial at a pre-trial motion, the accused citizen usually wins when the accused is represented by a highly-trained and SFST-qualified DUI lawyer.

Beyond the basic PRACTITIONER course, our Atlanta DUI attorneys – all of them — have also taken and passed the NHTSA Field Sobriety Test INSTRUCTOR course.  This training separates our DUI law firm from others and is an advantage for our clients at motion hearings or at trial.  Hire a DUI lawyer who has more HGN test training than the police officer in your case. That is how you win when other criminal defense attorneys can’t.

For FREE legal advice, you can call an Atlanta criminal defense lawyer at our DUI law firm RIGHT NOW, professional lawyer consultation with one of our DUI attorneys. Dial our criminal attorneys at 404-567-5515. Our DUI defense attorneys are experts in challenging field sobriety tests. With any of our three partners, you will be speaking to a DUI lawyer with thousands of drunk driving cases under his belt.