By: Larry Kohn and Cory Yager, partners at Kohn and Yager LLC, with our practice areas being limited to criminal defense, DUI defense, and traffic tickets of all types and descriptions.

Arrests for driving under the influence signal a serious criminal offense for which the accused driver must either utilize a public defender or hire private legal counsel. When facing criminal charges of any kind (outside a minor traffic charge, the accused person should start gathering information on attorneys near me to handle their defense.

This article explains how changes within the State of Georgia legislature have allowed “communities” in multiple metro counties to seek cityhood. With approval by the Georgia General Assembly, these local groups no longer must be governed by the unincorporated county commissioners of certain highly populated areas within the metro Atlanta counties. 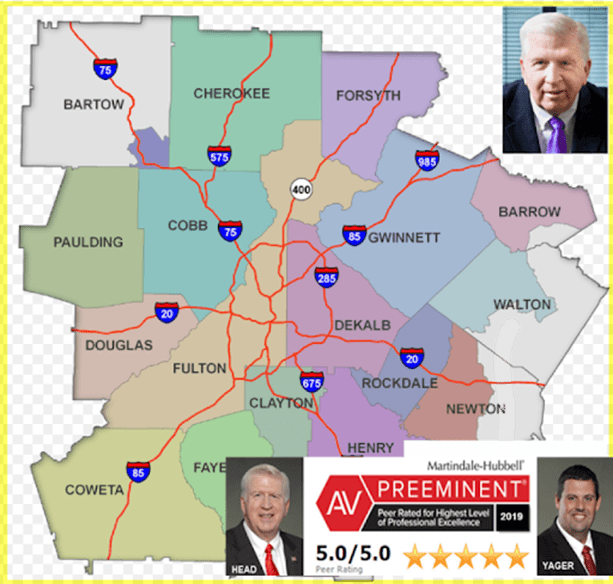 Plus, some new cities were previously part of the sprawling City of Atlanta Georgia, which still has sections of city territory within Fulton, DeKalb, and Clayton Counties. Without question, Atlanta traffic in the metro 19 counties substantially exceeds all other traffic in the State

As urban sprawl has expanded the Atlanta metropolitan area, some new tourist attractions have remained downtown such as the Georgia Aquarium, the College Football Hall of Fame, and the World of Coca-Cola. The Atlanta Braves moved out to Cobb County, and the Braves’ minor league team set up in Gwinnett County. Yet the long-time major attractions like Stone Mountain that sprawls across the DeKalb County and Gwinnett County line and Six Flags over Georgia are still highly popular.

Until the last two decades or so, the City of Atlanta Georgia covered a much larger area. That meant that the old City Court of Atlanta was the #1 DUI trial Court in the State of Georgia. Before 2004, that specially legislated Atlanta Court was legislatively-granted the ability to conduct jury trials in misdemeanor DUI cases.

So many cases were being processed at this Atlanta Traffic Court, and bringing in so much revenue, that the late Judge Lenwood A. Jackson obtained a commitment from the Mayor and Council under former Mayor Bill Campbell to build a new courthouse to accommodate the high volume of jury trials. The courthouse is now standing at 150 Garnett Street, Atlanta GA 30303.

After that step was taken, the City Council and Mayor realized how large that annual budget cost was going to be. Then-Mayor Shirley Franklin and the City Council obtained legislative approval to close the Atlanta City Court and leave only the Atlanta Municipal Court, to handle non-jury DUI trials and other traffic offense cases.

What led to this change was a movement of outlying communities to set up their own cities within Fulton County, Gwinnett County, and DeKalb County. In doing this, the new cities basically “carved out” new municipalities from those parts of their respective counties so that these enclaves can be self-governed. Several were previously partially or fully within Georgia’s capital city’s limits, Atlanta GA.

Since then, these new cities have been chartered and approved by the Georgia Legislature for cityhood:

In 2022 and future years, more new cities are being planned in Cobb County and these other three major metro counties, as those citizen groups seek to have “local control” over their affairs and the taxes generated by that real estate. With each new city, additional police officers are hired, and a chief of police is appointed to then take over basic traffic and crime control within these new cities in Georgia.

Any traffic ticket issued by those new city law enforcement officers generates revenue for and for that new municipality. With each new city being launched, this new dynamic means fewer traffic tickets being written by the Atlanta Police Department.

DUI attorney Georgia. To be able to have lawyers near me for DUI throughout the State, our criminal litigation firm maintains 4 metro Atlanta office locations. In addition, our legal team has set up affiliations with 20 other law firms across Georgia that have demonstrated a level of professional excellence in asserting DUI defenses for their clients.

By having criminal law attorneys stationed across the metro area, you can not only get the best DUI lawyer in Atlanta, GA. This network allows our callers to get an experienced DUI attorney in Decatur, or the best DUI lawyer in Georgia in any part of our vast state, through our referral. Plus, in any other state, if charged with driving while intoxicated or impaired driving, our lawyers for DUI near me can refer you out.

What Training, Credentials, and Lawyer Ratings are needed for Being Part of the Kohn and Yager Network?

The approach to having statewide coverage was the brainchild of senior partner, UGA grad and veteran Atlanta DUI lawyer Bubba Head, an attorney in GA for nearly 46 years, graduating from the University of Georgia law school in June of 1976. Thus, our Atlanta DUI attorneys now maintain a DUI law office in Alpharetta, Marietta, Sandy Springs, and Downtown Atlanta on Peachtree Street.

Through the group’s meetings, the DUI lawyers in Georgia were able to advance the knowledge and training of this group’s members. The GA DODD group is still in place and is now facilitated by the Internet and (through email and texting) instant communication of ideas and strategies in defending impaired driving cases now takes place.

As a DUI lawyer in Atlanta, Mr. Head pioneered DUI-DWI lawyer training across the United States for learning the inside story about police field sobriety tests, breathalyzer malfunctions, and crime laboratory errors that can help obtain acquittals for our criminal law clients. The effort started in 1991 when he and the late Reese I. Joye, Jr., of North Charleston, SC, wrote 101 Ways to Avoid a Drunk Driving Conviction.

That same year, the award-winning drunk driving defense lawyer designed a multi-day, intensive legal seminar in the Buckhead area of Atlanta, GA that used veteran DUI trial lawyers to teach DUI trial skills to young criminal law attorneys, This unique training program was called Mastering Scientific Evidence in DUI-DWI Cases, and still is being utilized in 2022. The non-profit program was donated by Mr. Head to NCDD in 2002, which co-sponsors it with TCDLA.org.

In 1996, at Emory University Conference Center, he organized and sponsored the nation’s first DUI breath testing training seminar, to teach OWI and OUI lawyers across the country about the shortcomings of the Intoxilyzer breath alcohol testing device. Criminal attorneys from as far away as Alaska attended the training.

Bubba Head and Cory Yager have enjoyed the highest Martindale-Hubbell “av” preeminent ratings for over a decade. Larry Kohn and William C. Head have been named Best Lawyers in America for the Atlanta GA market since 2009.

All three law partners have been rated in Super Lawyers attorney ratings more than 30 separate annual rankings, going back to 2004. The Legal Services Firm has between tapped by U S News & World Report for Best Law Firms in America every year that organization has ranked Georgia attorneys. All three partners also are nationally published DUI law topic co-authors and regular seminar speakers.

Call today, for your FREE consultation and legal advice from lawyers near me who are recognized DUI law experts. Dial 404-567-5515 24 hours a day, even on weekends and holidays.