The information on “accuracy” of these evaluations, which is taught to and used by police, came from Dr. Marcelline Burns (creator of the field sobriety test “battery”) and her team of paid experts who were all Ph.D. psychologists (or candidates for a Ph.D) in southern California. NONE of the researchers were qualified as medical experts in eye functions or eye diseases. This was determined in an appellate court holding in a New Mexico Court of Appeals decision, State v. Lasworth, 131 N.M. 739, 42 P.3d 844 (N.M. App., 2001)

Should I Take the DUI Eye Test – HGN or VGN test?

You should DECLINE taking either, due to the very high false positive (false arrest) likelihood. Plus, since the medical tests possibly are being administered sometimes by a person with only a high school education and no scientific or medical background whatsoever, do you want this bogus evidence to be part of the “proof” in YOUR criminal court trial?

Doctors do not use HGN or VGN to identify or measure ANYTHING relating to alcohol intoxication.

Additionally, no board-certified ophthalmologist would EVER approve of a layman doing these DUI eye test maneuvers to help make an arrest decision. Your Atlanta DUI lawyer knows which DUI expert witness to use to refute the scientific reliability of standardized field sobriety tests.

Nystagmus Causes Jerking Within the Eyes 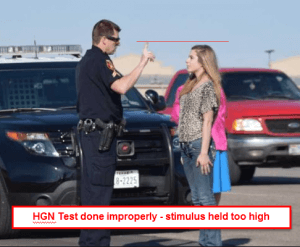 Call today (404) 567-5515 for your free consultation with a DUI lawyer near me and receive accurate legal advice and legal services.

Their goal is to TRY to identify DUI-DWI suspects who have a sufficient quantity of alcohol to be a “high dose” for that individual, or the presence of 1 of the 7 DRT classifications of drugs (PCP), or both. The problem with this is that NO DOCTOR would ever make such a guess, even though his or her medical training far exceeds that of all the DRE officers in America.

Like horizontal gaze nystagmus, vertical nystagmus or vertical GAZE nystagmus [VGN] CAN be caused by central nervous system depression. However, both DUI eye test evaluations for nystagmus causes are “overly sensitive” because they often incorrectly identify sober drivers as being “an arrest decision”, along with DUI suspects who are “over the legal limit.” The VGN part of standardized field tests comes after the horizontal gaze nystagmus [HGN] evaluation is concluded.

Officers in the NHTSA standardized field sobriety courses are taught that a DUI suspect that has VGN “nystagmus causes” has either a high dose of alcohol for that particular individual’s tolerance level, or is high on PCP.

Officers are also trained to not look for VGN (vertical gaze nystagmus) until they have first evaluated horizontal gaze nystagmus in the suspect. Then, the officer changes direction and movement of the stimulus from side to side (lateral movement) to moving it in a vertical manner, while the suspect keeps his or her head still, and looks UP and DOWN following a moving stimulus.

See Mr. Head’s VALUABLE DUI lawyer article on beating the field sobriety tests at a DUI trial and the sordid history of how police were allowed to use a medical eye test to make their drunk driving arrests, even when nearly 50% of the time, improper administration of the various “passes” of the stimulus create false positives to occur (people who are under the legal limit are “identified” as being DUI, and falsely arrested).

See another DUI lawyer video about the field sobriety test known as the horizontal gaze nystagmus. 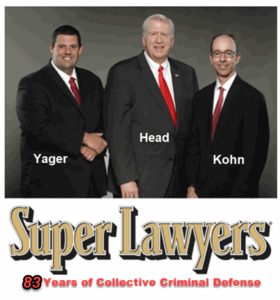