The legal term “indictment” identifies a legal process relating to committing a crime that came to America by way of English common law. The importance and significance of this legal protection is proven by its place in the Bill of Rights or the United States Constitution. Our Fifth Amendment covers due process of law, and other issues (e.g., Miranda Rights), but indictment by Grand Jury proceedings is also part of this infamous 5th Amendment.

What Is the Origin of the Word “Indictment?”

The origin of the unique word actually came from the root word from the French “enditer.” A derivative word, “enditement,” was coined, which that dates back to the late 13th century. In modern times, it is fair to say that “to charge with a crime” is descriptive enough to be an “indict meaning.”

Today, the sinister connotations that arise form just hearing the phrase “the Grand Jury indicted” creates immediate fear and trepidation because serious legal consequences can come from any subsequent felony conviction of the indicted offense or offenses. Americans may not know the indictment definition, but from watching an episode of “Law and Order,” or “American Greed,” somebody is in DEEP trouble when an indictment is “handed down.” The next step following that is that a formal accusation by the DA is coming, and the case the gets placed on a criminal trial calendar in Superior Court (or similar state court with felony offense subject matter jurisdiction.).

In serious a criminal case, the law in England called for a legal process by which a large group of local citizens (from the county where a crime was alleged to have been committed) to be assembled to consider whether “probable cause” existed to believe the truth of the Government’s assertion. Probable cause is a legal term of art meaning the existence of ”reasonable and trustworthy information that a person may have committed a particular crime.” This, in a nutshell, is the definition of the legal document known as an indictment.

For an indictment to reach a grand jury, the suspected criminal offenses must constitute a violation of the felony laws, federal or state. Interestingly, the United States Constitution initially did not apply to state crimes. The Constitution related to federal criminal law, not state criminal proceedings. But, when the various states wrote their state constitutions, most east coast states patterned a similar right to have a grand jury indict you. Then, in 1868, the 14th Amendment was passed, in order to have some parts (but not all) of the Bills of Rights.

The helpful chart below shows where, for levels of proof in criminal justice cases, probable cause falls on the “stairway.” The lower level of evidentiary proof falls below the 50% mark, which may shock you, but the accused person still gets a chance to win at trial. 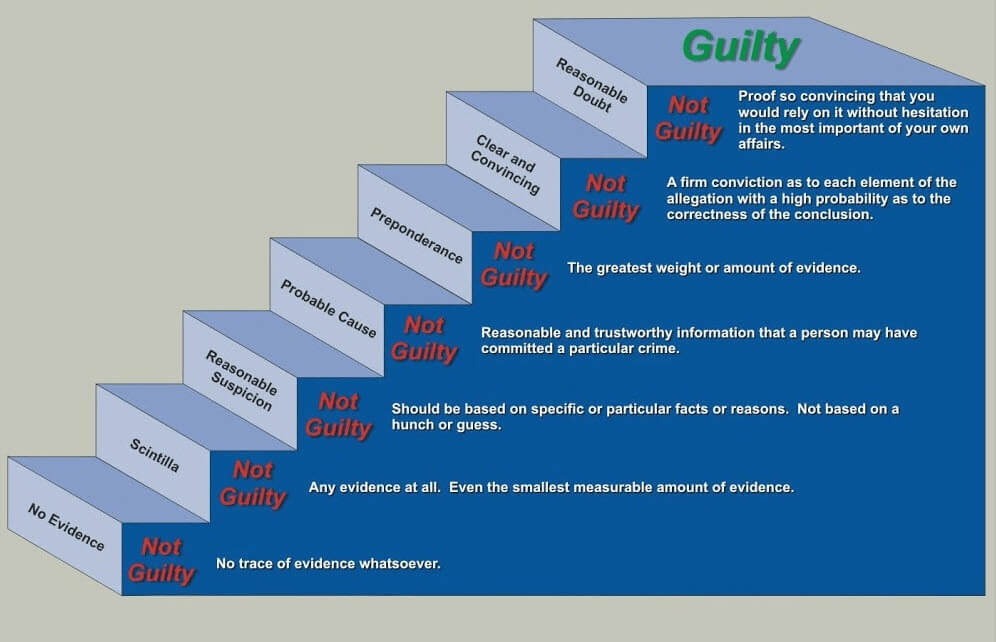 Why a Grand Jury Indictment is Needed for a Serious Felony

So, both in the English common law countries and the USA, the indictment procedure of assembling a Grand Jury is NOT a trial, and the Grand Jurors have no power to determine “guilt.” Beginning with the Magna Carta in 1215 A.D, the English people (over the next several centuries) routinely sought to create a “brake” on the unlimited power of the Crown (meaning the King of England or Queen of England).

One of those buffers or impediments against the Monarch’s absolute power was to mandate that (before any trial jury could occur) that a large group of county citizens had to agree with the Government about the sufficiency of evidence of criminal acts before a trial could be utilized to try to gain a conviction. The secret grand jury hearing would then be undertaken, with the District Attorney presenting the existing, known evidence in such a way as to have at least 12 of the grand jurors would see that a felony indictment was supported by probable cause. When this occurs, a “sealed indictment” known as a true bill, would be issued. If fewer than twelve vote to indict, a “no bill” is issued, by that Grand Jury. As can be learned below, a Prosecutor can try again, with the next Grand Jury.

This “large” group of local citizens took on the name “grand,” since the purpose was to have MANY in the group agree before any person could face capital punishment or possibly life imprisonment. The value of such a barrier to overreaching by the Government did not escape the Founding Fathers in the mid-1700s in the American colonies. Our Bill of Rights contained this GUARANTEE, in one of the several “due process” rights created by the Fifth Amendment.

“No person shall be held to answer for a capital, or otherwise infamous crime, unless on a presentment or indictment of a Grand Jury, except in cases arising in the land or naval forces, or in the Militia when in actual service in time of War or public danger”.

When a felony DUI vehicular homicide Georgia occurs, or any other serious felony charge in Georgia (rape, aggravated assault, drug possession, DUI felony), the usual steps are for police or investigators to make an arrest, based on an arrest warrant executed before a Judge. Then the accused citizen is placed in custody, and the criminal lawyer representing him or her can do one of three things:

Such strategic decisions are best left to the criminal attorney who has been entrusted to direct the path of the criminal case, to obtain the best result. Contact our experienced criminal attorneys at our Atlanta GA law firm, for a FREE lawyer consultation. 404-567-5515. This initial meeting offers you FREE legal advice from our three partners, each of whom has stellar lawyer ratings and legal industry recognitions. Call Bubba Head, Larry Kohn, and Cory Yager now. What do you have to lose, when the meeting is FREE?