In Elliott v. State, 305 Ga. 179 824 S.E.2d 265 (2019), a Clarke County State Court case, a legal challenge was made at a pre-trial motion hearing that challenged a court ruling that was going to allow a DUI refusal of the breath alcohol test on the CMI Intoxilyzer 9000 during the trial of driving under the influence case in Athens, GA.

The ruling by the Georgia Supreme Court reversed the Athens-Clarke County judge’s erroneous ruling and changed the DUI law in Georgia forever. After this ruling, those accused of drunk driving by violating OCGA 40-6-391 (the DUI GA statute), no longer had to face the prosecution from informing the jury about their refusal to take a breathalyzer test, during the criminal trial.

What happens when you refuse DUI test? When Ms. Elliott was arrested for DUI, the arresting officer sought a post-arrest, implied consent, and breath alcohol test on the Intox 9000 device at the Athens-Clarke County Police Station. The accused, Andrea Elliott, said “no” to the forensic test. All previous Georgia appellate rulings had allowed post-arrest breath alcohol test “refusals” to be argued by the prosecutor as a consciousness of guilt. 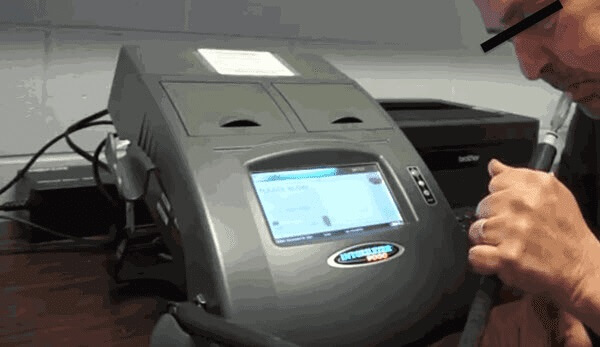 Under Georgia’s black letter law, the prosecution had been able to use that “evidence of refusal” at the criminal trial since the 1960s. The motion hearing focused on the criminal defense attorney for Ms. Elliott arguing that the refusal to acquiesce to THIS type of DUI test was a violation of the Georgia Constitution, Article 1, Section 1, Paragraph XVI.

Refusal to submit to an alcohol test cannot be used against you in the trial. In the State of Georgia, an arrested DUI suspect can refuse a post-arrest Intoxilyzer 9000 test. When this occurs, some officers will just write up the administrative license “refusal” to be tested on the GA DDS 1205 form and take that driver to jail.

Refusal to submit an alcohol test can result in an administrative loss of driving privileges. Other officers will re-read the implied consent notice for a blood test, to either get a refusal of that type of test too or possibly get consent to take this type of forensic test. This type of test can also identify if the driver is incapable of driving safely or less safe for the person to drive, due to being under the influence of alcohol, drugs, any toxic vapors, or marijuana.

Can you lose your License for Refusing a Breathalyzer? Potentially, yes you can lose your driving privileges at the administrative license suspension hearing. Therefore, you need to retain a skilled and knowledgeable DUI attorney near me to take all necessary steps to protect your ability to keep driving.

What happens if you Refuse a Breathalyzer? However, thanks to a 2017 law, OCGA 40-5-64.1, most first-offense DUI suspects (ages 21 and older) who have Georgia driver’s licenses can opt for a 12-month ignition interlock device, if they have refused.

Prior to another case, Olevik v. State, Georgia cases followed existing Georgia code provisions that had (for decades) allowed the State to use refusal against the accused citizen. The United States Constitution offers no such protections.

DUI Refusal Cannot Be Used Against Defendant at Trial, After Elliott vs State

The Elliott case has now routinely been cited by other Georgia lawyers to exclude both breath alcohol tests collected on an Intoxilyzer 9000, and any DUI refusal evidence. In addition, the Georgia’s implied consent notice was hurriedly amended by the Georgia Legislature and signed into law on April 28, 2019, by Gov. Brian Kemp.

The official Georgia case cite is now found at 305 Ga. 179, in the Georgia official reporters. The three different versions of that newly worded, 2019 implied consent warnings can be found here. 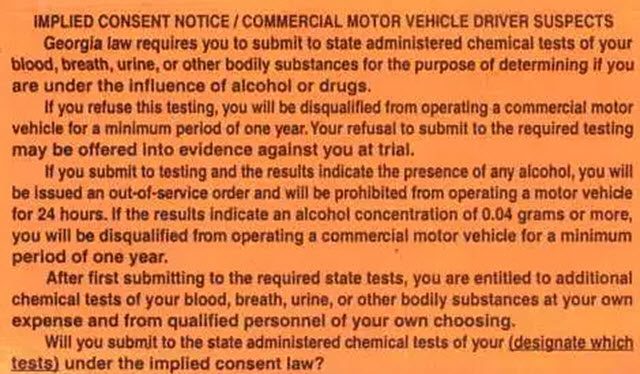 What Is Georgia Implied Consent Law?

More about GA implied consent laws. For over 60 years, Georgia has had an implied consent law, as codified in OCGA 40-5-55. The concept for such laws is to allow law enforcement to gather proof of the at-fault driver’s BAC levels when injuries or fatalities have resulted from a highway crash. Plus, when cops see a moving motor vehicle driving erratically or commuting any traffic offense, any pullovers will be followed up by the officers looking for signs of intoxicated driving.

The function of such laws is to enable a police officer to obtain a post-arrest sample of breath, urine, blood, or other bodily substances, to determine if you are over the legal limit for alcohol, or under the influence of any drug to the extent of impairment. When those arrested for DUI refuse testing, that refusal to submit an alcohol test can typically be mentioned in trial, but no longer, after the Elliott decision.

So, in Elliott, both the OLD version of OCGA 40-5-67.1 (b) and 40-6-392 (d) were ruled to be unconstitutional, as applied to breath alcohol tests, OR a person’s refusal to submit to an alcohol breath test. This blocks the admissibility of that refusal at a criminal trial.

Why Not Call the DUI Lawyers Who Also Write the Book on Georgia DUI Laws?

Our three law partners are now the co-authors of the leading treatise on DUI laws in Georgia. The Georgia DUI Trial Practice Manual was first written (in 1995) by Bubba Head. Now, he and his partners will keep it updated in the future.

Because our DUI attorneys provide you with a FREE lawyer consultation about your pending DUI case so that you can understand how your pending DUI case can be defended, why not call today? Our goals are to protect your right to drive, keep you out of jail, and to find a non-DUI solution to this major problem in your life.