In Georgia, the crime of unintentionally causing death by way of operating or being in actual physical control of a motor vehicle is called either vehicle homicide,” “vehicular homicide,” or “homicide by vehicle.” This code section is OCGA 40-6-393.

Vehicular homicide cases pose major problems for an accused motorist in both the criminal and the civil arena. If the underlying traffic offense is categorized by Georgia laws as a serious driving offense, then felony punishment is at stake. Plus, death cases, even from a misdemeanor vehicular homicide Georgia offense (such as running a stop sign or crossing the centerline), can potentially cause a multi-million-dollar civil verdict against the at fault driver.

Where the underlying driving event is DUI vehicular homicide, in any state, a special federal bankruptcy law makes such a debt (from civil damages) generated by DUI homicide awards, non-dischargeable. This means that the at fault driver convicted of DUI homicide could spend the rest of his or her life paying that debt, including selling off all assets and garnishing wages.

The key word for either of these categories of homicide by vehicle is “unintentional”, which distinguishes felony vehicular homicide in Georgia from murder or similar intentional crimes causing death. The difference between homicide and murder is that the State must prove intent to kill with murder.

Murder is premeditated homicide, and vehicular homicide is the causing of death of another person, by way of committing a traffic violation. Like all criminal cases in GA, homicide by vehicle crimes are defined in Georgia statutes by the Georgia General Assembly.

Similarly, the many different titles of similar crimes to vehicular homicide in Georgia show that each state’s Legislative branch of government puts both a “title” or description of the crime, and sets forth the underlying serious driving offenses that will trigger a felony vs misdemeanor crime.

All states have this category of driving offense for DUI homicide, but the majority of jurisdictions call it “manslaughter.” The moniker or title placed on the crime does not change the fact that all states call for felony punishment for causing death by driving under the influence.

What Is the Sentence for Vehicular Homicide in Georgia?

The chart below is a quick reference for felony-level punishment of three criminal statutes relating to causing death or serious bodily injury, in Georgia. Be aware that if the at fault driver was already declared to be an habitual violator, the maximum sentence increases to 20 years, not 15.

OCGA 40-6-393.1 is the special code section in GA for vehicle feticide, or causing the death of an unborn fetus at any stage of its development, by virtue of committing either reckless driving or DUI in GA. The unintentional causing of death of any fetus, at any stage of its development, which is different from most other states. Other states require the State to prove that the fetus was capable of life, if outside the womb.

What Is the Sentence for Vehicular Feticide in GA?

Feticide by vehicle (when caused by drunk driving or reckless driving) is a felony and carries the exact same minimum and maximum sentence as vehicular homicide, and can be separately and consecutively punished. Since the Georgia Legislature changed the law in 2008, no requirement at all is mandated for showing that the fetus was capable of sustaining life outside the womb, or being in the “quick.” 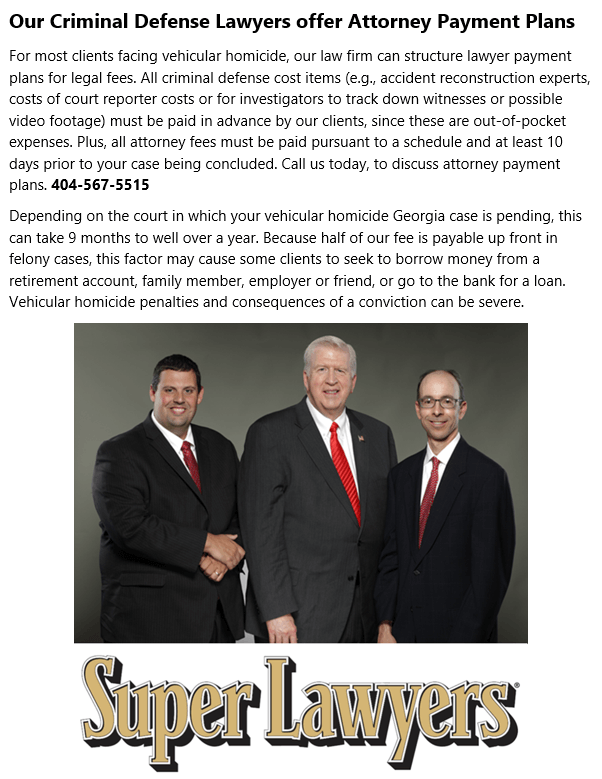