When facing a DUI arrest in Georgia, one of the biggest decisions the accused individual has to make is which DUI lawyer to hire. To answer the question, “How much is a DUI attorney?” a full explanation of how different law firms approach DUI defense is needed. Then, we can discuss how supply and demand for the best DUI attorney controls that cost.

Great results are what all accused impaired drivers in Georgia should seek when they hire a criminal defense lawyer in Georgia. We know this because no celebrity, TV personality, or sports star goes to a DUI court without the best DUI attorney they can find, since money for legal fees is not an object.

Lawyer fees for DUI in GA are a mere pittance to these financially secure individuals, whose careers can suffer a multi-million-dollar impact from bad publicity from a criminal conviction, or lose pay for missed games in mid-season, for a professional athlete.

At all costs, they seek to avoid jail time for drunk driving and do not want their ability to travel out of the United States restricted. A few athletes have potential DUI immigration issues, especially in situations for professional athletes.

Why It Costs More for the Best DUI Lawyer in Georgia

Not surprisingly, the top DUI attorneys in the state charge more for their services than the average DUI lawyers or cheap DUI attorneys. Supply and demand control professional services just like they control the cost of platinum, gold, rare earth minerals or salaries for a high-demand CEO.

Three primary reasons exist for this:

What Is the FULL DUI Defense Cost?

The stumbling block for most people is knowing the full DUI defense cost. Many DUI attorneys who advertise their legal services quote low legal fees, or “one-price-covers-all” DUI costs. Accused citizens with any knowledge of the legal system, knows that this sounds “fishy.” They can smell either a “bait-and-switch” scheme, or shoddy work from a cheap DUI lawyer.

While this “single, low price” sounds attractive, common sense tells you that all DUI cases are NOT alike. Some DUI arrests with police evidence of performance on one or more field sobriety test exercises, and possible breath alcohol test evidence need expert witnesses to be able to achieve the best outcome at trial.

Plus, in DUI accident cases, our DUI law firm can spend 40% more time than non-accident cases, as we try to get car insurance coverage for and injured parties. One of our goals is to do what we can to protect our clients from a civil judgment that can bankrupt them.

William C. Head is the most highly awarded DUI lawyer in Georgia. A drunk driving book author since 1991, his credentials are more numerous than any other, and his fees reflect that higher cost, based on supply and demand. Mr. Head will not take ANY case for which the client merely wants to plead guilty to DUI. Both Larry Kohn and Cory Yager have worked with Mr. Head since law school.

Below are just three major recognitions or awards Mr. Head has received, but the list of lawyer ratings and recognitions is extensive.

Bubba Head’s law partners obtain outstanding results for their clients, even in very tough DUI cases. Mr. Kohn is one of the top-rated attorneys in Georgia under AVVO attorney reviews. Both partners in his DUI law firm are national drunk driving book authors (like him) and have been recognized by national lawyer ratings services for excellence in the field of criminal defense and DUI defense.

Why not call for your FREE lawyer consultation, and learn the benefits to hiring a DUI lawyer who will FIGHT for you? Call NOW, at 404-567-5515. What do you have to lose? 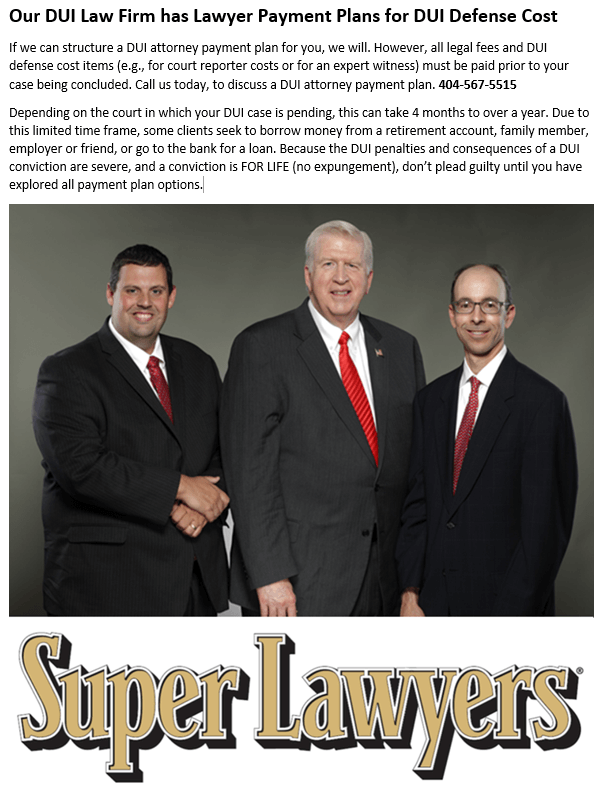