What Is Child Endangerment in a DUI Case?

Child passengers in vehicles driven by unsafe operators are a clear and present danger, and violate criminal law in Georgia. When the cause of “not being safe” is based on drunk driving or drugged driving, all but three states in America have enacted criminal statutes generally known as “child endangerment laws.” GA child laws are in the top one-third of all state laws for being the toughest on child endangerment charges.

The extreme dangers of drinking and driving with child in car is taught to police at their basic training. Georgia endangerment charges (DWI with child in car) can be a Georgia misdemeanor, but multiple children as passengers who are under age 14 may reach the felony child endangerment DUI status of 4th offense DUI in GA. Read more below.

Predictably, as with all state statutes, each state’s legislature has crafted its own criminal charges for this legal topic. Child neglect or child abuse are closely related to DUI and child endangerment charges. Our child car laws typically include jail time, even for first offense child endangerment charges. Our DUI lawyers can answer the question how long does a DUI stay on your record? 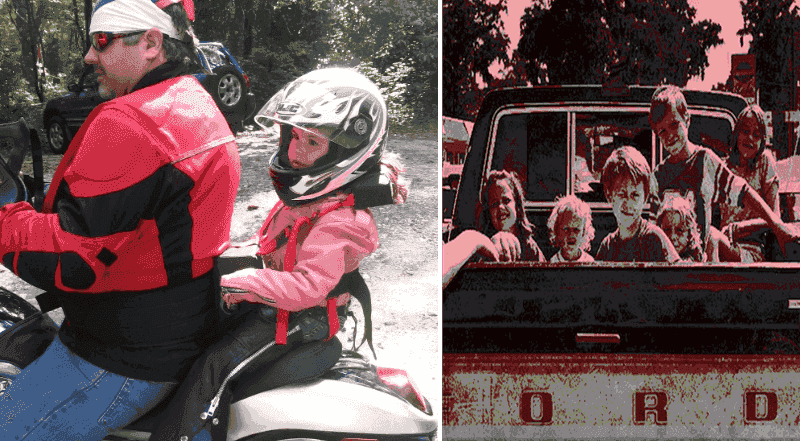 DUI With Child in Car – Felony or Misdemeanor?

Clients call us in a panic and ask, “Is child endangerment a felony?” Usually not, but ONE driving incident CAN trigger a felony in Georgia, if three or more children under age 14 are passengers.

Georgia is one state with heavier punishments for a DUI child endangerment charge but is not the quickest to categorize such an offense as a felony. Seven states make even a first offense DUI-DWI a felony if impairment by controlled substances or the more common driving under the influence of alcohol is proven.

In Georgia, our statute adds a new DUI charge for every child passenger under age 14 years old, in that specific vehicle. When any driver who lacks full mental functionality due to ingesting the substance that impairs him or her puts one or more child passengers at risk, the courts come down hard. An even worse outcome can occur from a crash than dying in an overheated vehicle, and driving drunk or buzzed by drugs is present in a much higher number of cases.

What Happens When You Are Charged With Child Endangerment?

Uniformity in statutory provisions across America is lacking. Typical penal code wording is couched in words like “child abuse” or “neglect of the needs of a dependent child” (as state law defines children, in that jurisdiction). However, tough driving laws exist to try and deter anyone, including parents and guardians from taking such risks, for helpless children who depend on adult discretion and supervision.

Intent to be drunk is not an element of motor vehicle operation while impaired. All the driver must intend is the consumption of alcohol or drugs, and then getting behind the wheel with one or more children as passengers. As with other state laws, the standard of what constitutes drunk or impaired is state-specific. Impaired to the slightest degree is used in several states like Maine.

Will I Go to Jail for DUI Child Endangerment?

Most states in America have passed laws creating a separate crime of child endangerment when children under a certain age are passengers in a vehicle being driven by an impaired driver. In some states like Illinois, the crime is a felony DUI, with a minimum of 7 months in jail if convicted.

In most states (including Georgia), however, the crime of driving while intoxicated—DUI with child in car—is a DUI misdemeanor unless a child who is a passenger is killed or suffers serious bodily injury as a result of the DUI accident in which he or she was an unwitting passenger.

Most reported appellate cases have dealt with DUI-alcohol cases, but some cases deal with driving under the influence of drugs or DUI-combination of alcohol and drugs. Even for a first offense misdemeanor DUI child endangerment case, the typical minimum jail time (across the United States) is ten days, which is what Georgia DUI law requires.

Call 43-year veteran Atlanta DUI attorney Bubba Head today and get honest answers to all your questions. Tell us everything that happened and everything you remember about your DUI arrest. The sooner you call us, the better chance we have to win your DUI case and get your charges reduced or dismissed.

Mr. Head is one of only four Board Certified DUI lawyers in Georgia, and Mr. Head has authored or co-authored over a dozen books, including the top-selling book on Georgia DUI laws. Additionally, the three most reliable, peer-based attorney rating services, Best Lawyers in America, Martindale-Hubbell “av” preeminent, and Super Lawyers have all repeatedly and continuously recognized his expertise. More than 23 years ago, William C. Head started the National College for DUI Defense and launched national DUI lawyer training for standardized field sobriety tests and breath alcohol testing. The Georgia lawyer has handled over 200 appeals of criminal and civil cases.