Unlike other felony or misdemeanor crimes in America, a person pulled over in a traffic stop, or at a DUI checkpoint in Georgia, and then taken into police custody, is never given his or her Miranda rights required under the Fifth and Sixth Amendments.

The reason for this omission is that police are taught that once the arrest is made, all that police will WANT after arrest is to take a sample of some bodily “substance” (i.e., blood, breath or urine) to quantitate your level of “impairment.” 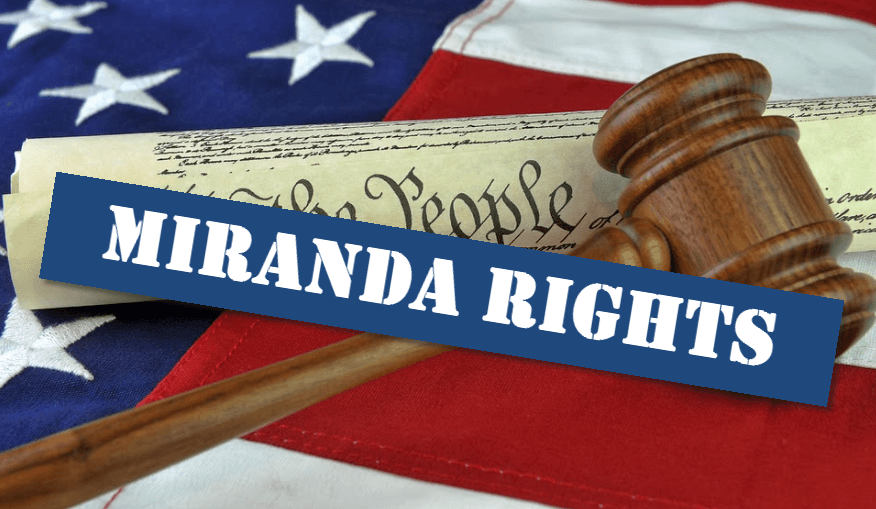 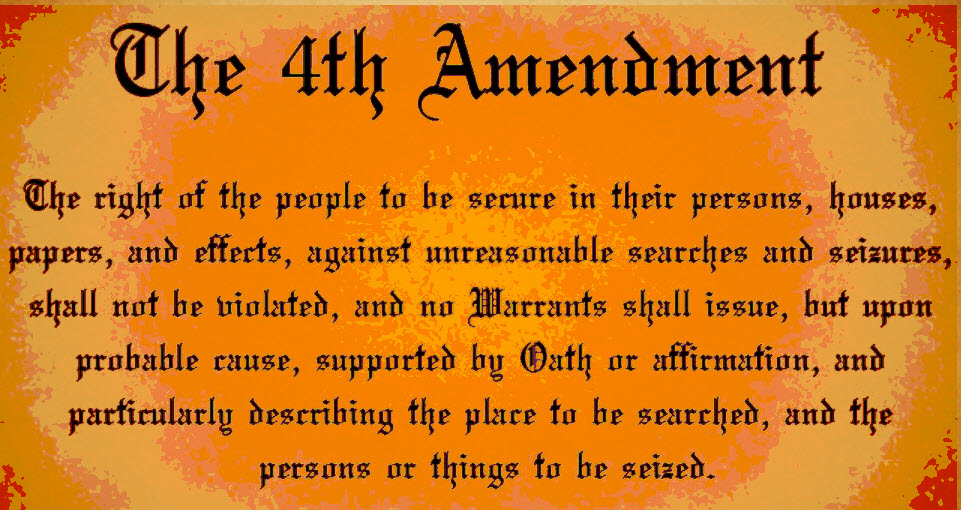 The taking of evidence implicates the Fourth Amendment, pertaining to “warrantless searches and seizures.” So, as presently given under implied consent laws in Georgia, no compliance with the Fifth Amendment or Sixth Amendment exists, and the advisement is incorrect, in what it says about any “refusal to be tested” being used against you in the criminal trial.

Your refusal to submit (under implied consent laws that exist in EVERY state) can cost you the ability to drive motor vehicles, due to license suspension or license revocation. For over 50 years, NHTSA (the National Highway Traffic Safety Administration) has pushed for implied consent laws that harshly punish citizens for refusing a breathalyzer, or a blood test or a urine test, after a DWI-DUI arrest. 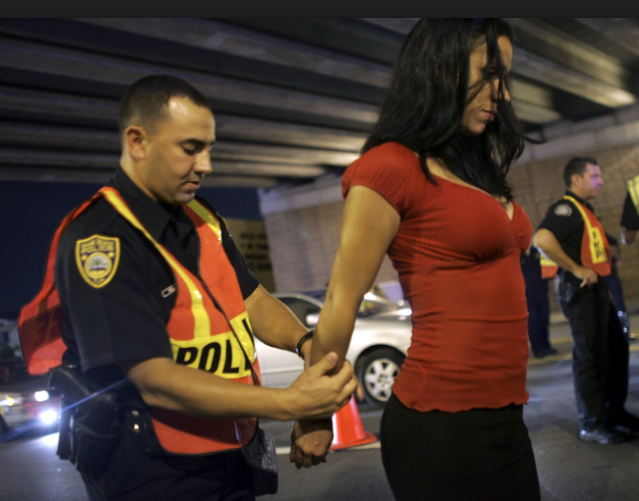 The PROBLEM with a law enforcement officer collecting that additional, incriminatory “evidence” (usually by breath tests for alcohol content) under implied consent laws is that the NUMBERS created by such forensic testing (in a DUI alcohol case) CREATES a new type of crime, called DUI per se by being “over the legal alcohol limit.”

This type of DUI crime, in fact, is EASIER to prove as the first “type” of DUI offense used to cuff you, which is DUI less safe (impaired driving), as it is called under Georgia DUI laws.

With Post-Arrest Collection of More Evidence Against You, Why No 5th Amendment Miranda Rights?

Our nation’s highest court has ruled that the giving of such a sample, post-arrest, is not a form of “interrogation.” That ruling was consistent with many years of prior ruling limiting anything but verbally confessing to being “protected” by the federal 5th Amendment right “to not be compelled to be a witness against himself.”

Additionally, since about 50 million drunk driving arrests have been made since Miranda was decided, and few states (NC, SC) have legislatively required Miranda rights to be given BEFORE post-arrest evidence collection of breath tests takes place, no such ruling could be expected.

\The implications of declaring such non-Mirandized incriminatory evidence to have been illegally collected is unacceptable, from a stare decisis standpoint. 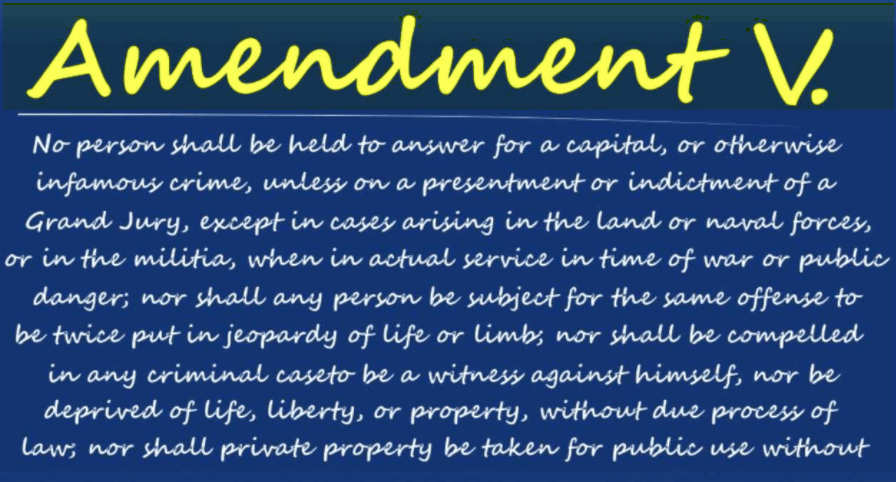 The United States Supreme Court, (in a 2016 landmark case, Birchfield v. North Dakota), ruled that the Fourth Amendment of the Constitution is not “offended” by a law enforcement officer collecting a post-arrest breath test, without giving Miranda rights first.

So, the federal law applicable to implied consent testing is established by the US Supreme Court, which has determined that requesting that the detained driving under the influence driver is not giving “testimonial” evidence.

So, a non-Mirandized citizen being asked to blow into a breathalyzer device so as to provide the “numbers’” needed to convict him or her, after arrest, cannot depend on the 4th Amendment of the U.S. Constitution. You must know, and exercise, your Constitutional rights, as best you can.

However, in a 2017 Georgia Supreme Court case, (Olevik v. State), the Georgia high court was tasked with interpreting the Georgia Constitution’s provision on post-arrest self-incrimination. This seminal decision holds that Paragraph 16 of the GA Constitution (Ga. Const., Art. 1, Section 1, Paragraph XVI) DOES protect against BREATH alcohol testing, because (for the arrested person to deliver the deep lung breath sample) requires multiple “acts” to be done by the in-custody, with-no-right-to-a-lawyer, DUI suspect.

Plus, because Georgia implied consent law lacks any semblance of Miranda warnings, the drunk driving arrestee in a garden-variety, misdemeanor, first offense DUI arrest is being denied the same protections that a police officer must give murder suspects, rape suspects, and child molestation suspects.

What Are the Miranda Rights?

The word “Miranda” is taken from the landmark United States Supreme Court case, Miranda v. Arizona, from 1966, where the highest court in the land set forth the rules for post-arrest, custodial interrogation. Under a due process (basic fairness) analysis and not being required to be a witness against yourself, the 5th Amendment mandates that the complete Miranda warning be given, at a minimum.

Absent a full reading, which is required to be given to meet Constitutional completeness, the attempt to comply with Miranda v. Arizona falls short. Below is Ernesto Miranda’s prison mugshot: 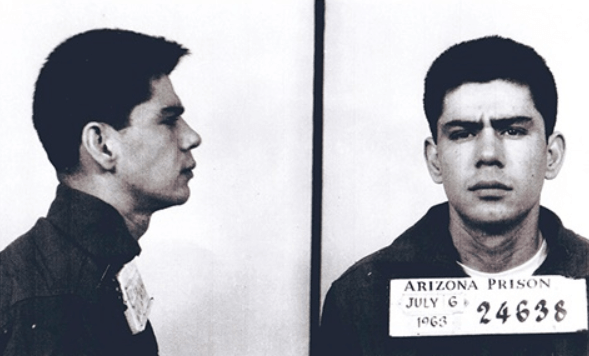 The full Miranda warnings have SIX separate parts to notifying you of the right to have an attorney present. In the “Dirty Harry” series of movies by Clint Eastwood, the Miranda Rights and how a police officer who does not LIKE our legal rights, may want to ignore or circumvent them may deny a suspect those rights, was crudely portrayed for law-and-order public consumption.

What Are the FULL Miranda Rights?

These are the six (6) parts of the Miranda Rights: 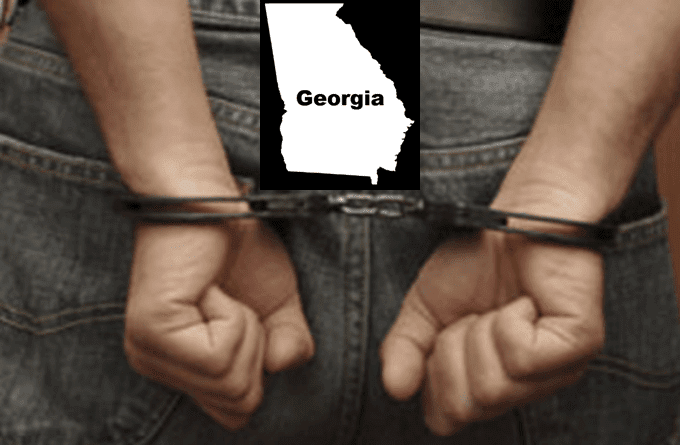 The crux of the Miranda advisement basically includes being instructed about your federal Constitutional right to remain silent (in the “detention” situation you are in), that you have a federal Constitutional right to have a lawyer before being questioned further after an arrest for driving under the influence of alcohol, and that a free attorney can be made available under the 6th Amendment.

Almost every single arrest of any type will involve POST-ARREST custodial interrogation. If you don’t remain silent or SAY NO, the police officer (after giving the Miranda warning) will ask questions. You can say nothing AT ALL, because you are ALREADY arrested for a crime. Once arrested, your freedom to move around, use a phone or communicate in any way with the outside world is blocked.

When Does the Miranda Warning TRADITIONALLY Apply?

In a traditional criminal case, Miranda warnings apply to custodial interrogation AFTER a person has been arrested. This stage of a criminal case is called a Tier 3 Terry situation, where no doubt about the person being in custody exists any longer.

What Is the Georgia Implied Consent Law Notice?

The Georgia implied consent law “notice” is a warning which basically states that the person is being arrested for drunk or drugged driving and that a chemical test of the driver’s breath, blood or urine is being requested, and that refusing breathalyzer or blood testing will suspend your right to drive in Georgia. If you refuse to take the TYPE of requested chemical test, you risk losing your driving privileges.

The Olevik Case Changed Everything, for Breath Testing

Until 2017, dozens of prior appellate cases about GA implied consent law, which is part of our State’s Georgia DUI law, dodged this important issue. The appeals courts in Georgia never before upheld the right of Georgia citizens to NOT submit to the requested breathalyzer test, under the State Constitutional right to NOT ACT, post-arrest, to give self-incriminatory evidence.

After Olevik, the best DUI lawyers in Georgia are now filing new challenges in every driving under the influence of alcohol cases, which is about 90% 0f all drunk driving cases. 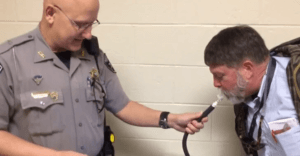 Many people mistakenly think that by not giving a definitive answer, they may get out of taking the test and not be held liable for refusal in a Georgia DUI case. However, a DUI refusal occurs (under implied consent) whenever anything other than an answer of “yes” is given. Some repeat offenders have decided that they prefer risking the 12-month license suspension for refusal, or taking the new ignition interlock device option, over giving the prosecution any additional forensic evidence in the form of a chemical test.

Should I Give Consent to Be Tested?

Mr. Head’s general advice (to any person not involved in a serious bodily injury accident or a fatality accident) is that you should submit to the requested state administered chemical test and then demand to have a private blood test taken at a location of your choice.

Georgia has a very punitive law relating to refusal of the implied consent test. If you refuse the official implied consent test and subsequently lose your administrative license suspension hearing, you stand to lose your Georgia driver’s license for a full 12 months with no chance for a limited driving permit.

A person licensed in another state will have his or her driving privileges in Georgia suspended for a minimum period of 12 months for refusing a breathalyzer. The failure to properly deliver an implied consent sample can trigger an administrative driver’s license suspension for a full year. The person licensed by another jurisdiction may also have this notice of license suspension sent by Georgia DDS to his or her state DMV or DPS, which could have repercussions in that jurisdiction.

This is a rare occurrence, prior to being convicted, but it does happen in some instances. Your DUI lawyer Atlanta can direct you on how to fight that suspension or revocation of your driver’s license in your home state.

By now, you SHOULD know that you need the best DUI lawyer possible, to try to beat a DUI in Georgia. Call 41-year veteran Atlanta DUI attorney William C. “Bubba” Head today and get honest answers to all your questions. Tell us everything that happened and everything you remember about your DUI arrest.

The sooner you call us, the better chance we have to win your DUI case and get your charges reduced or dismissed.   More information at Google +.

Remember, you only have 30 DAYS to file a license suspension appeal or apply for an ignition interlock device, or your driver’s license will be suspended for up to one year! Talk to Super Lawyers Bubba Head, Larry Kohn, or ex-cop Cory Yager now. Our DUI attorneys are available 24 hours a day, weekends, and on all holidays.