By: Cory Yager, ex-cop and now an award-winning DUI Attorney and Larry Kohn, veteran Traffic Ticket Lawyer for over 20 Years in Atlanta Georgia

Because over 90% of Georgia driving under the influence cases are alcohol related, knowing the drinking limit in GA that applies to you case is highly important. No single “number” exists to answer the question “what’s the legal alcohol limit in Georgia?” This page touches on both the Georgia legal limit and issues relating to probation, if you have been sentenced.

The Georgia alcohol driving limit for adults (not operating a commercial motor vehicle) is 0.08 grams percent under O.C.G.A. 40-6-391(a)(5). This has been the drinking limit in GA since 2001, when former Gov. Roy Barnes pushed through legislation to lower the Georgia DUI limit under federal mandate issued by former President Bill Clinton.

The legal limit in GA was forever changed to this low BAC level, after going from 0.15, to 0.12 and later to 0.10 in our State between 1969 and 2001. So, this answers the common question posed to our DUI lawyers near me: What is the Legal Alcohol Limit on an OCGA DUI?

What Is the Legal Limit Blood Alcohol Level or for Drugs?

This section discusses the legal breathalyzer limit and the blood alcohol level legal limit. Spoiler alert: Both numbers are the same for the three identifiable categories of drivers using Georgia’s highways. 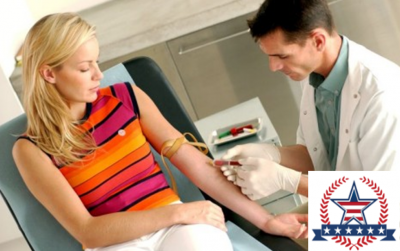 The major difference in the types of tests is that when substances other than ethanol (drinking alcohol) are suspected to have caused the driver’s impairment, a drug test (at a different section of the GBI) can be utilized to detect contraband and prescribed drugs, over the counter drugs, marijuana and other synthetic drugs and chemicals that might be in the person’s body.

The next paragraph covers these three (3) separate permissible blood alcohol level driving numbers. Every state in the United States typically has these same three delineations for permissible BAC levels, but other states put their underage BAC limits at either 0.00 grams or 0.010 grams, to identify their zero-tolerance law. Plus, in 2019, the State of Utah pushed its adult BAC down to 0.05 grams percent.

What Is the Legal Limit for Alcohol in Georgia? 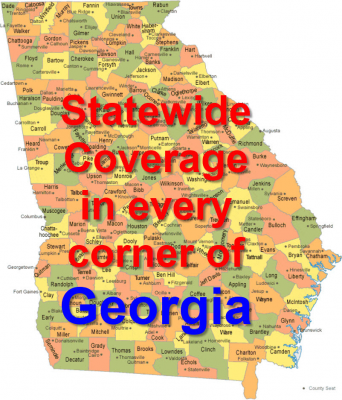 In all cases where the arrest is made on or after January 1, 1995, and the state selects breath testing, two sequential breath samples shall be requested for the testing of alcohol concentration. For either or both of these sequential samples to be admissible in the state’s or plaintiff’s case-in-chief, the readings shall not differ from each other by an alcohol concentration of greater than 0.020 grams, and the lower of the two results shall be determinative for accusation and indictment purposes and administrative license suspension purposes.

By the way, the date shown above (1995) is when the old rule permitting a single alcohol breath test to be admissible evidence in a DUI in Georgia. Then, on January 1, 2013, the CMI Intox 9000 became an approved evidential breath testing device in the Peach State. 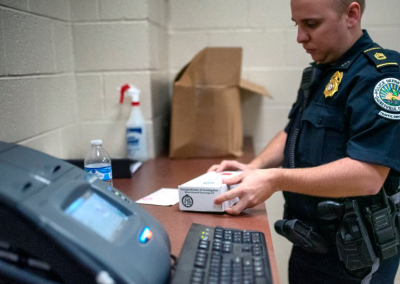 The outdated and archaic Intoxilyzer 5000 was given a “sunset” date of December 31, 2015, because local police departments had to find budget money to purchase new testing machines. Beginning January 1, 2016, the old 5000 breathalyzers were mothballed. [See subsection (5) of Ga Comp. R. & Regs. 92-3-.06 entitled “Techniques and Methods”].

So, breath alcohol testing devices have a wider variance in dual testing when trying to estimate your breathalyzer legal limit. Any real scientist will concede that a blood alcohol analysis by GC-MS-MS or LC-MS-MS is more precise than any Intoxilyzer GA BAC.

Plus, for CDL license holders who are behind the wheel of a CMV (commercial motor vehicle) in 0.04 grams percent, plus if any detectable alcohol or a DUI refusal to submit to a post arrest implied consent test occurs, that big rig operator will be placed on a 24-hour “no driving” order, leaving the vehicle stranded.

Knowing the GA drinking limit is important since Georgia DUI laws statutorily presume that being AT or OVER those BAC legal limit “numbers” is sometimes called per se DUI, at which the Legislature has decreed that it is not safe for the person to drive or be in actual physical control of a motor vehicle in Georgia. This standard, which is less safe to drive (by alcohol) has a counterpart standard for drugs called “incapable of driving safely.”

DUI Chart Georgia: What Is the Legal Limit for BAC?

The foregoing section talked about how a blood alcohol level Georgia test can be obtained by an Intoxilyzer or via blood and urine testing when drugs other than alcohol are involved. Plus, the drinking limit in Georgia was covered, for various types of motor vehicle operators.

The chart below is a ROUGH estimate, based on lean body weight of the accused driver. Be aware that this is a male chart, and that less alcohol would be needed for a female of the exact same weight as the male, since the female body is built to have more adipose (fat) tissue. 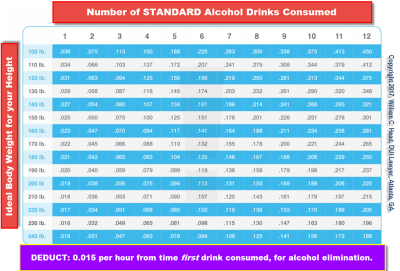 A probation officer is assigned to oversee and regulate compliance of any person on a probated sentence for the duration of the probation period. Once on probation a “zero” tolerance is imposed, meaning that the person under supervision can’t have any psychoactive substance (that is not lawfully prescribed) in his or her system, or show the metabolites within his or her system. 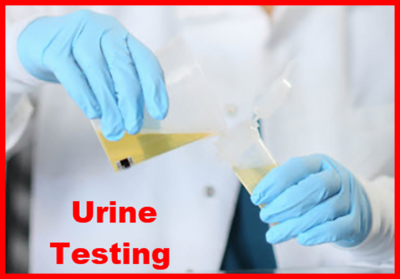 Plus, the type of testing commonly used (ethyl glucuronide or “ETG” tests) are an immunoassay test method that can flag either the parent drug or chemical or the “burn-off” products of that drug which are the substances that the human liver transforms into metabolites of that substance. Georgia probation rules require that any positive “presumptive” test for a prohibited drug category or an ETG test for alcohol that shows dilution or comes back with high numbers (over the department’s posted dilution levels) will trigger a probation violation.

Be aware that these readings have nothing to do with the legal limit for driving or a legal limit alcohol “number.” Instead, since every probationer is embargoed from consuming alcohol in any form, when a test shows a threshold level of markers indicating prior use, a portion of that sample is then sent to a medical laboratory by overnight shipment for a confirmatory test. Upon confirming what the immunoassay test revealed, the probationer faces sanctions such as jail time.

Georgia probation officers have the right to administer their choice of tests (which is usually urine) to try to check probationers for violations or the rules of probation. Random tests are synonymous with DUI probation in the state of Georgia. Plus, when most people complying with periodic probation visits, they are told to expect to be tested, but these scheduled samples are in ADDITION to their right to call from random testing.

The tests can be of your blood, breath, saliva, hair follicle or urine. The probation officer does not need any reason for the test. They do not have to suspect that you were drinking or smoking pot. They can test you simply because they want to; they don’t need to suspect anything.

If you should fail a drug or alcohol test by testing positive for marijuana or alcohol, then the judge can sentence you to serve jail time. It is up to the judge to determine how much incarceration you would serve. 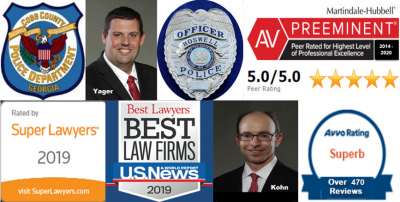 Here are the benefits of calling our Law Office: