Is your first DUI a Felony? Georgia DUI Law Explained

All DUI attorneys know that most police assigned to a potential DUI felony are well-trained when a death or serious bodily injury in a traffic offense occurs, and that an officer should not merely issue a traffic ticket.

However, instead of this being the case in Atlanta GA, the Atlanta DUI Task Force was disbanded by the new Chief about 5 years ago, and these better trained officers are now doing other work, and not being specially assigned to each potential felony DUI accident. This is often an advantage to a person accused with a DUI Atlanta case involving an accident. 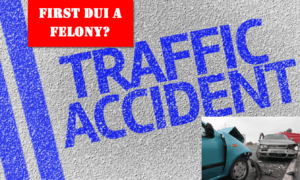 Avoid Self Incrimination – REMAIN Silent When Suspected of a DUI Felony

No matter if you are facing a 1st DUI or a drunk driving felony, always remain silent. Don’t think that you will be told your Miranda rights, because you won’t, in a GA DUI. All that is required to be told to you, after being arrested for DUI, is the Georgia implied consent law statutory notice. Only when you are being questioned about new crimes will a Miranda warning be provided.

REMAIN SILENT! All that is required to be given to police is your correct name and address. Police are trained at the academy and other police training courses to obtain a suspect’s self-incrimination, by questioning a suspected drunk driver to get him or her to admit drinking or using drugs (illegal or prescription).

This will then authorize an arrest for suspicion of an Atlanta DUI, so as to require the person to take the implied consent test, or possibly lose the right to drive in Georgia, for up to a full year, for DUI refusal.

What DUI Evaluation Questions Will I be Asked During an Atlanta DUI?

Before arresting a suspected drunk driver, police who make Atlanta DUI arrests are trained to ask “investigatory” DUI questions like these:

All police questioning for DUI GA suspects is designed to INCRIMINATE you, and to give the officer “articulable suspicion” to arrest you for DUI in Georgia.

Once a person talks and answers the DUI evaluation questions, the likelihood of the driver in a DUI fatality or serious injury by vehicle accident going to jail, for driving under the influence of alcohol or drugs, increases exponentially. The right against self-incrimination in a Georgia DUI is useless if you GIVE IT UP by talking to Atlanta police.

Plus, in felony DUI cases, the driver being investigated for DUI Georgia and facing a lawyers for DUI arrest who refuses to be tested by a breath alcohol test, will likely be subjected to a forcible DUI blood test. This is done pursuant to a search warrant, which can be obtained from a Judge via phone call or in person.

Then the arrested drunk driving suspect potentially faces license suspension for the DUI refusal (under Georgia implied consent law) and then having to face the forcible blood test results at the DUI GA trial.

These three lawyers for DUI Atlanta cases operate a DUI law firm in Atlanta, Georgia, from three office locations. Bubba Head, or one of his other law partners, who are Atlanta DUI lawyers, can assist you on a repeat DUI offense or serious bodily injury or vehicular homicide GA DUI fatality case.

To learn more about DUI Penalties in general, click on this link.

Get a FREE Lawyer Consultation With a DUI Specialist Today

If you need 24-hour lawyer for DUI, call our DUI law firm now for immediate help. (404) 567-5515. Our FREE professional criminal case assessment is worth your time and energy. If winning is your objective, call our Georgia drunk driving lawyers today.

Our Atlanta DUI attorneys will review the DUI lawyer cost, and the likelihood of getting a DUI reduced to reckless driving in GA. We will assist you quicker than you can say “dui attorney!”