Step 5 of 7: Is Taking the Traditional Appeal to an OSAH Hearing Wise?

The Georgia DDS Processes Appeal: Is This the Best Option after July 1, 2017?

Appealing your license confiscation and pending ALS suspension with Georgia Department of Driver Services will not be as common after July 1, 2017.

Prior to a change in Georgia DUI law pertaining to a Georgia implied consent law appeal before a Judge at the Office of State Administrative Hearings (OSAH) was the routine “due diligence” for a DUI Lawyer in Atlanta GA. This will be far less common, now that an ignition interlock alternative exists for drivers who REFUSED to submit to post-arrest police testing of breath, urine or blood.

Under OLD DDS appeal law, (pre-July 1, 2017) any DUI refusal who did not appeal lost the right to drive for a full year, after the 31st day following arrest for DUI in Georgia. Atlanta DUI attorneys would file the DDS GA appeal, and HOPE that the officer was a “no show” at the OSAH hearing.

Absent that, many drivers faced “a Hobson’s choice” of agreeing to plead guilty to a Georgia DUI, in order to not risk a total loss of driving privileges for DUI refusal. 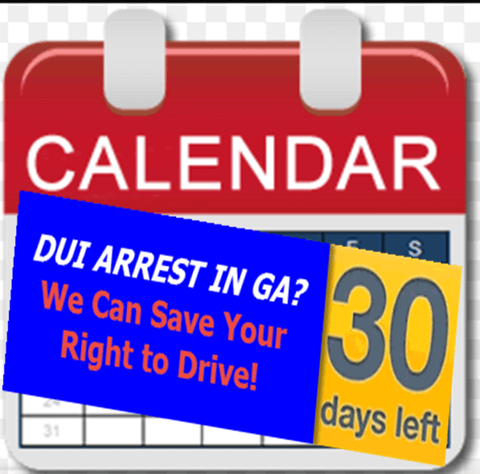 How the DDS Appeal of an Administrative License Suspension Works

Under prior law (pre-July 1, 2017), a driver arrested for DUI in GA had 10 business days to FILE an appeal, with $150 filing fee, at Georgia DMV headquarters in Conyers GA. He or she had been given a piece of paper called a DDS Form 1205, which acted as a temporary driving permit, for 30 days following the DUI arrest date.

If timely and properly filed, the DUI driver received (from DDS GA) a notice of an extension of driving privileges in the mail, and this notification was then carried with you, along with the DDS 1205 form and your DUI ticket in case you needed to prove that you did not have a license suspension GA.

Even before the extension form from GA DDS arrived, the DDS Georgia computer would indicate (on the police officer’s computer, that your limited permit has NOT expired. The paper DDS 1205 acted as your temporary license and was not restricted license, in terms of limiting you to work purposes only.

The Georgia DDS in Conyers Notifies the OSAH Office in Atlanta

After the OSAH headquarters receives the administrative notice from DMV Georgia, the staff at OSAH will determine which of their 14 judges will be assigned to hear the administrative license appeal.  These hearings are grouped for assignment of the hearing date based on the LOCATION OF ARREST.

This policy assumes that most GA DUI arrestees live close to where they were arrested, and then won’t have too far to travel to the designated courtroom for their administrative license suspension hearing at OSAH. 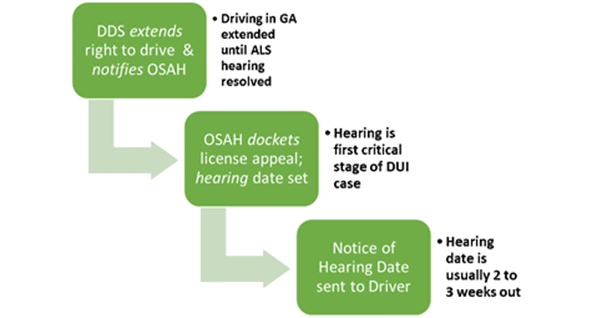 Most of the time, your initial hearing date will be 2 to 3 weeks after your mailed notice is received.  For a proper cause or reason, either the officer or the appealing suspended driver can seek a short continuance, under the OSAH Rules. Your DUI lawyer Atlanta can assist you on these rules and guidelines.

Many people facing drunken driving charges procrastinate, and do not hire a DUI attorney immediately after their arrest for driving while intoxicated. This delay often results in disaster, when a vital court date is forgotten or overlooked. Plus, getting the DVD from your arrest is vital to winning, in many cases. This takes time to accomplish.

While an experienced Atlanta criminal defense attorney who is familiar with all aspects of the DUI process can SAVE this disaster from occurring, he or she cannot UNDO a “default” of the self-represented, accused impaired driver.

NOT filing your DDS GA appeal, or doing it without the $150 check, or a day late can take away the driver’s right to drive for a full year.

Call our 24-hour lawyers for DUI. We offer a FREE lawyer consultation, to GUIDE you to the right path. Call us NOW at 404-567-5515. William C. Head, Larry Kohn and Cory Yager are here to help you KEEP DRIVING and not have a DUI on your criminal history. That means we FIGHT for YOU. 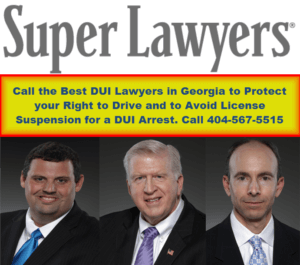