OUTCOME: Atlanta DUI lawyer Bubba Head helps Marietta woman in single car accident get an acquittal on a DUI 3rd offense despite a 0.23 blood test result – how to beat a DUI blood test 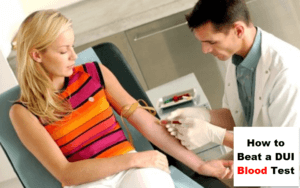 On a rainy night in Cobb County, GA, Client was driving toward her home on Sandy Plains Road in Cobb County, Georgia. She had been drinking at a Marietta bar with a fellow employee after they left work. Her co-worker was buying drinks for some of his friends, including Client. She did not eat before drinking, and at only 120 pounds, it did not take many free drinks to get her inebriated.

During a heavy downpour, she drove through a puddle of water and hydroplaned to the left, into a concrete retaining wall. Her Toyota was disabled. No other vehicles wrecked or were struck by her car. It was about 7:30 PM when the police were called to the scene of the accident by another eyewitness.

Before police arrived, Client had convinced a passing motorist (who saw her standing in the rain) to take her the remaining short distance to her home. This female Marietta woman took her home, a distance of less than 2 miles. When the Cobb County Police officer who was investigating the crash was met by the 911 witness at the crash location, he learned that the driver of the Toyota had departed.

The Cobb police officer radioed dispatch with the tag number of the wrecked vehicle, and Cobb County dispatched a second police officer to go to her home, which was near the wreck location. That officer found CLIENT walking around from the back yard of her home to the front of her house.

She had prior DUI arrests, and contacted the previous Marietta DUI attorney, who had pleaded her guilty before, to her 2nd DUI in GA. He told her that the blood test results would be over the legal limit, and to plead guilty and take her punishment. Then, she contacted DUI attorney Atlanta Bubba Head, whom she had found in an Internet search.

Exercise the Right to Remain Silent

He asked her if she had been involved in a wreck. She did not exercise her legal right to not talk, beyond merely giving her name and her home address. She admitted to being in the wreck, which was incriminatory evidence against her, but not necessarily fatal to fighting this DUI case.

He then attempted to get Client to perform some field sobriety tests, which she declined, based on advice she had received from the prior Marietta DUI attorney she had hired after her last drunk driving arrest. She (and everyone else in America) has the right to decline ALL field sobriety test requests by ANY police officer, because they are 100% voluntary and optional. So, Client correctly exercised her constitutional right to decline to do any sobriety field tests.

The officer arrested her despite the fact that she did not attempt to perform field evaluations. The officer then read her the implied consent warning required under Georgia implied consent law, which basically says that her refusal to agree to take the requested breath, blood or urine test (the officer’s option) would result in her Georgia driver’s license being suspended for one full year. Because alcohol was suspected as the impairing substance, the officer requested a breathalyzer test.

Our Client spoke up, saying she preferred a blood test. Although the officer is NOT required to honor such a request from a DUI detainee, for the person’s choice of implied consent test, this Cobb police officer did not insist on a breath test. He re-read implied consent for a blood test.

The Cobb County officer read the Georgia implied consent notice and asked her for both a blood test and a urine test, to determine her BAC level. After giving her blood at the nearby Smryna, GA hospital, she was transported to the Cobb County adult detention center for booking.

She was charged with DUI alcohol per se – OCGA 40-6-391 subsection (a)(5), for being over the legal limit. Because no field tests were attempted or performed, by Client and her driving was not observed by any officer (and could have been a total accident, due to heavy rain) the Cobb County officer did not charge her with being DUI alcohol less safe.

Client hired DUI lawyer William C. “Bubba” Head as her criminal defense attorney. Her DUI case would be heard at Cobb County State Court, which offers either a bench trial (non-jury) or a trial by jury.

The criminal lawyer she had hired previously had twice before simply pleaded her guilty to DUI, and she knew that in light of harsh DUI penalties for a DUI third offense, she needed to fight this driving under the influence case, or lose her right to drive, her job and her home. As a divorced mother of a grown son, she had no place to go if she lost her home.

High Blood Test Result of 0.23 Grams Percent From the GBI

The blood test came back from the GBI several months later as being a 0.23 blood alcohol content. The legal standard for adult drivers was 0.08 grams per cent. Client’s two prior drunken driving convictions within the last 5 years meant that a guilty plea or a trial loss on a DUI 3rd offense would take away her driver’s license for 5 years, plus put her in the Cobb County jail for several months.

Mr. Head, an Atlanta DUI attorney with a satellite office in Cobb County, investigated the case thoroughly, seeking an answer to how to avoid Client getting another drunk driving conviction, and a DUI third offense. In Georgia, this means a 5-year Georgia driver’s license revocation.

Multiple pre-trial motions were filed on Client’s behalf, seeking to suppress certain evidence that was essential to Client being able to win her case. Pre-trial plea discussions with the DUI prosecutor assigned to this case did not get very far, since the Cobb County State Court assistant solicitor wanted a full year in Cobb County jail to be served by the Client, on a guilty plea to third offense DUI.

Based on the completed accident investigation and drunken driving arrest, and after reviewing the prosecutor’s witness list and the video from the arrest scene, Bubba Head advised her to waive her right to a jury trial, and go forward on a bench trial.

The waiver of jury trial — in the right case — is one of dozens of DUI defense strategies developed by the DUI defense attorney over decades of criminal trial practice.

Right to Remain Silent at Trial Exercised by Client

As is the usual plan for criminal trials, since the defense has NO burden of proof, DUI defense lawyer Bubba Head did not plan to have his client testify. No need existed for Client to take the witness stand and testify, and (in most criminal trials) this changes the dynamics of how the trier of fact perceives the evidence, or LACK of evidence.

The burden of proof is always on the State (prosecution) to prove all parts of the case, beyond a reasonable doubt. At trial, Client was found not guilty of DUI by the trial judge when Mr. Head was able to use one of the suppression motions to block the blood test results from being admitted into evidence, due to a flaw in the chain of custody of the blood test results.

Plus, the State failed to bring any witness to trial (e.g., the 911 caller) who could establish when the time of driving occurred. Additionally, no police officer asked Client if she had consumed alcohol AFTER getting home, before she was spotted walking from the back of her home to the front door. So, these multiple DUI defense strategies were successful, and Client’s DUI dismissed.

Client was found guilty of leaving the scene of an accident involving property damage (which was not an offense that would take her driver’s license) and fined by the judge and placed on probation for 12 months. No jail time followed.

Client served no additional jail time at all, despite an original recommendation by the prosecutor (if she would plead GUILTY to DUI 3rd offense) of a jail sentence of 12 months, based on her horrible prior driving under the influence and criminal history.

If you have a pending DUI case ANYWHERE in GA, call Cobb County DUI lawyer Bubba Head at 404-567-5515 or 1-888-DUI-HEAD [1-888-384-4323] for a FREE copy of his 430 page DUI book for clients, plus a FREE lawyer consultation and DUI case assessment by Mr. Head or one of his law partners, and learn how to avoid a conviction for a third DUI offense (or even a conviction for a first DUI offense). Talk to DUI specialists Bubba Head, Larry Kohn, or Cory Yager now. We are available 24 hours a day, weekends, and all major holidays.

You can email DUI attorney Bubba Head your case information at his email address: wchead@criminaldefensematters.com, for a quick return call from his Cobb County DUI law firm, to set up an appointment.

Because a DUI conviction is FOREVER – it never comes off your criminal history – pleading guilty to a DUI charge is a huge mistake, if you have any chance to win. This Client in Cobb County State Court did not believe that she had any chance to win her 3rd DUI, but placed her faith in Bubba Head. Are your drunk driving facts WORSE than this case?

Call 41-year veteran Atlanta DUI attorney Bubba Head today and get honest answers to all your questions. Tell us everything that happened and everything you remember about your DUI arrest.

The sooner you call us, the better chance we have to win your case, by finding and implementing DUI defense strategies to beat a DUI.