Which Gwinnett County Court Will Handle My DUI in Georgia?

Nearly a dozen Gwinnett County courts could be your first stop at arraignment (first appearance), following your arrest for DUI in Georgia. The state of Georgia has an unusually substantial number of different courts that handle misdemeanor traffic and Georgia DUI arrests, and these tribunals in Gwinnett County, GA include the juvenile court, probate court, 14 municipal courts, a recorders court, a state court, and a superior court. Driving under the influence cases is common in all of these courts.

Today, the national headquarters for Waffle House, as well as insurance giant Primerica, NCR Corporation, and America Megatrends are based in the fast-growing north-central Georgia county. Named after American patriot and signer of the Declaration of Independence, Button Gwinnett, the first courthouse in Gwinnett County (see the image, above right) was at the home of settler Elisha Winn, built less than a decade earlier. The Dacula area home was purchased by Gwinnett County on December 15, 1818, when the county still had fewer than 5,000 residents.

In Which Court Do Cases Generally Begin for Gwinnett County?

When some clients first call our law office, they are confused about what the court has for their Gwinnett traffic ticket. The determination of “in which court do cases generally begin,” like most other questions, is controlled by Georgia laws on misdemeanor traffic tickets. The answer is ALWAYS found on the uniform traffic citation issued by the arresting officer, plus it can usually be determined by your bonding papers.

Below, see the RED oval indicating where and when your traffic court appearance is required.

Because the probate court in Gwinnett County does not handle any traffic or criminal cases, the juvenile court only deals with juvenile crimes, and since superior courts in Georgia only deal with felony cases, your most likely initial Gwinnett Traffic Court for all misdemeanor traffic ticket offenses is Gwinnett Recorder’s Court.

To be certain, simply look at your traffic ticket for the name of your specific criminal court, and your next court date, which is called an “arraignment.” 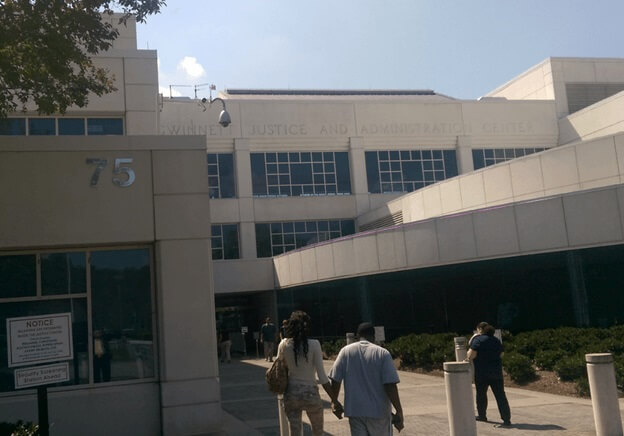 If Ticketed or Arrested Within the City Limits, You Are in a Municipal Court

When a local city was the place of your Georgia DUI arrest or issuance of a traffic ticket, (if you were arrested within a municipality (city), such as Duluth, Peachtree Corners, Norcross, Snellville, Sugar Hill, Berkley Lake, Lilburn, Lawrenceville, or Suwanee) then your traffic court will NOT be at Recorder’s Court of Gwinnett County, but will occur in that city’s municipal court.

In such municipal arrests, the Georgia DUI misdemeanor cases that are not juvenile or felony offenses go to that particular city’s municipal court. A 1st DUI offense can be in any of these courts, which share jurisdiction.

Misdemeanor DUI and other traffic ticket cases, outside the city limits of a Gwinnett municipality, (unless being charged for a juvenile driving under the influence case or as a DUI felony) start in the Recorder’s Court of Gwinnett County, GA. Refer to your arrest paperwork and traffic citations for this information.

What Is Recorder’s Court? A Special Gwinnett County Court

Three characteristics of the Gwinnett Recorder’s Court help identify the role and function of recorder’s courts in GA, as applied within the Gwinnett County Court system. First, this specially-legislated court handles criminal, misdemeanor, and county ordinance cases only.

Second, it only has jurisdiction (the power to adjudicate) over non-jury trials, meaning that no juries are ever assembled to hear cases in this Court. If you stay in Gwinnett Recorder’s Court, a judge decides your case with no jury.

Third, the design of this court is to be a “filtration system” set up to initially screen criminal cases arising in Gwinnett County, to alleviate overcrowding and backlog in the Gwinnett State Court.

State courts in Georgia are where misdemeanor jury trials are conducted, as well as a limited number of other civil cases (like personal injury car accident cases) are heard by the judges at State Court of Gwinnett County. For any person charged with a city court case, by demanding a jury trial, your case will go to State Court of Gwinnett County.

For MOST Clients, the Gwinnett Traffic Court Is Gwinnett Recorder’s Court

Sometimes called the Gwinnett County Traffic Court, all sorts of motor vehicle traffic citations and misdemeanor DUI GA arrests start their court journey in the Recorder’s Court of Gwinnett County, GA, where a non-jury (bench) trial is available. If you have a first offense DUI charge, some common law DUI plea bargains can be obtained, but you can always bind over your case for a jury trial at State Court of Gwinnett County.

In reality, very few Georgia DUI trials occur in non-jury courts like the Gwinnett Recorders Court, since driving under the influence is very serious and a jury trial typically offers better odds of acquittal from a statistical standpoint. Your DUI attorney can explain this dynamic to you, as well as the cost and time requirements needed for an expert witness. 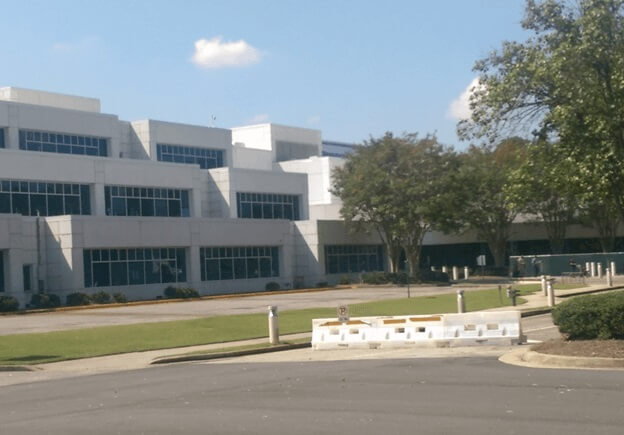 A simple request for transfer of your case to Gwinnett County State Court will cause your file to be moved over to that Court, which has jury trial jurisdiction, in Gwinnett County, GA. Don’t plead guilty to DUI Georgia, even if facing a 1st DUI, without consulting a DUI law firm that specializes in drunk driving defense.

Under Georgia DUI laws, all misdemeanor criminal cases are heard by a six-person jury. The Gwinnett State Court is located at 75 Langley Drive, Lawrenceville GA 30046, which is the Gwinnett County Justice and Administration Center. Statistically, a jury is more likely to acquit for a DUI charge than a judge hearing your case without a jury.

With growth comes industry, including the Mall of Georgia (in the Buford, GA area), Gwinnett Arena (now renamed the Infinite Energy Arena), plus is the home of the Gwinnett professional baseball team: the Gwinnett Stripers (formerly the Gwinnett Braves), and the highly successful Atlanta Gladiators (a professional hockey team).

Your Gwinnett County DUI May Start at a Municipal Court

Arrests for Georgia DUI in the following fourteen (14) Gwinnett county municipalities usually START the criminal court process in that city court, which are more commonly called “the municipal court.”

Plus, an entirely different solicitor (prosecutor) for DUI-DWI cases then considers, negotiates, and goes to trial on the case, on behalf of the city police who made the arrest for DUI in Georgia.

Six Gwinnett State Court judges are assigned to preside over misdemeanor traffic offense cases, including a DUI in Georgia. Whether the case originates at the Recorder’s Court of Gwinnett County or a Gwinnett county municipal court, this is where a jury trial can be obtained.

Plus, these are “courts of record”, meaning that a court reporter is assigned, and a direct appeal (to the Georgia Court of Appeals, of the Supreme Court of Georgia) can be obtained, after an adverse verdict or motions hearing the ruling. Our DUI attorneys have handled several hundred DUI cases in these Gwinnett courts over the last decade.

Vehicular homicide in GA (also called homicide by vehicle) by being a drunk driver carries up to 15 years in state prison, per “count” (per death, or serious bodily injury) by driving under the influence (DWI-DUI). Serious injury by vehicle GA cases can carry a 1-15 year potential prison sentence. 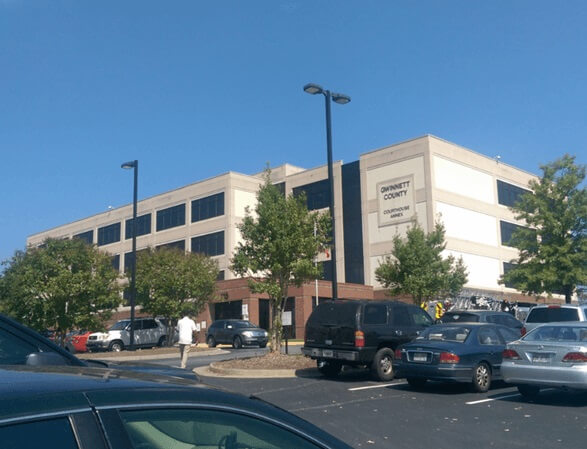 Get a FREE lawyer consultation and FREE legal advice by calling 404-567-5515. We will speak to citizens in need of our legal help on HOLIDAYS, weekends and at night, so call now.

Because DUI in GA is one of the most highly litigated types of crimes, our Gwinnett attorneys regularly have contested cases in the municipal courts in Gwinnett County, or in the State Court or Recorder’s Court.

DUI attorneys Larry Kohn and Cory Yager, have never worked anywhere else as attorneys in Georgia, except as criminal attorneys with William C. Head, Georgia’s most famous driving under the influence attorney. Whether facing a first-offense DUI or a 2nd DUI in GA, our criminal defense lawyers are prepared to help and are experienced when it comes to knowing how to beat a DUI in court.

For the past seven years, this has meant that over 100 drunk driving cases per year that were assigned to Atlanta DUI lawyer Cory Yager have been reduced or dismissed, without going to trial.

Attorney Cory E. Yager shares Mr. Head’s top Martindale-Hubbell ratings av 5.0 of 5.0 and has (for 6 consecutive years) been named as a Super Lawyers Rising Star (the designation for attorneys under age 40), which is unprecedented for a DUI lawyer in the state of Georgia.

Of the dozens of lawyers in Atlanta and other parts of Georgia who have worked with Bubba Head, no other attorney in Atlanta ever was named to so many consecutive Super Lawyers awards as Cory Yager. Since he turned 40 years old this year, Mr. Head expects Mr. Yager’s streak to continue in the Super Lawyers category.

Winning criminal cases is no easy task, and requires experienced DUI lawyers who are familiar with Georgia DUI laws and all aspects of pre-trial motions, trials (and appeals, if needed). Our drunk driving lawyers gladly talk about prior DUI case reports in Gwinnett County, so that prospective clients know that we are on their side and that we know how to beat a DUI.

Criminal defense attorneys who never fight a DUI in Georgia have no real chance of being offered a plea deal such as a DUI reduced to reckless driving, until and unless that criminal lawyer has proven that he or she will challenge the field sobriety tests, the breath alcohol test, and all aspects of the GA DUI arrest.

All three of our DUI law firm partners are instructors in the NHTSA standardized field sobriety test protocols.