Mr. Head’s client was pulled over by Cobb County police on October 8, 2014. The pullover was made after the Cobb police officer observed the suspect vehicle stop behind another car at a red light. In the short amount of time it took the red light to cycle back to green, the driver ahead of the police car had apparently passed out in his vehicle. This took place at the intersection of McCollum Parkway and Old Highway 41.

The police officer camera was a digital system, and it backed up to capture this sequence of events. One the driver failed to proceed, after the traffic light turned green, the Cobb officer activated his blue lights and bumped his siren. The sleeping driver then “woke up” and started to slowly drive forward through the intersection and turn onto Old Highway 41 in Cobb County, GA.

The blue lights were still activated, but the driver initially failed to pull over. Then, a citizen whose vehicle was driving directly in front of the suspected drunk driver slowed his car down in an attempt to get the vehicle being signaled by the law enforcement officer to stop.

The suspected impaired driver then pulled to the right shoulder, and stopped his vehicle. The Cobb County police officer walked up to the DUI suspect’s driver side window and asked him to step out of his car. At this point the officer observed that the driver was having trouble standing, and was very unsteady on his feet. Rather than try to investigate the suspect’s sobriety so close to moving traffic, the officer had backup police officers come to assist, and started a DUI investigation in an adjacent business parking lot.

The Three Standardized Field Sobriety Tests Are Given

The driver could not follow instructions on the HGN “eye test” evaluation, and failed the walk and turn and one leg stand field sobriety tests miserably, as seen on the police video. A handheld Alco-sensor was offered to the suspect, and he took the portable breathalyzer. That roadside breath test showed his breath alcohol level at 0.124, but this was not the official Intoxilyzer breath test.

Due to the symptoms of impairment being much more dramatic than the preliminary alcohol test, the officer suspected that more than just alcohol was involved. After telling the man that he was under arrest for driving under the influence (DUI less safe), the arresting officer read the Georgia implied consent law notice for a DUI blood test. The driver did not refuse to take the blood test. The arrested man was driven to the Cobb County jail, where two vials of his blood were drawn, and sent to the GBI for analysis.

The initial results from the GBI were returned only for the alcohol level. The blood draw showed the accused’s blood alcohol content (BAC) to be 0.121. A subsequent retesting showed Ambien (zolpidem) at high levels (0.14 mg/L).

The accused man retained Bubba Head as his DUI defense attorney. A not guilty plea was entered, and discovery requested from the Prosecutor. Cobb County attorney Bubba Head later watched the arrest video and immediately discovered that the arresting officer did not timely and properly read the correct and complete Georgia implied consent notice. This DUI defense strategy required a Motion in Limine, to suppress the blood test results.

In addition, Mr. Head filed another pleading called an Affirmative Defense, asserting that this was a somnambulant driving event, caused by an unexpected reaction to Ambien, or sleep driving. This pleading required the Prosecutor to prove, beyond a reasonable doubt, that the accused man did NOT “sleep drive.”

Mr. Head also found errors in how the field sobriety tests were instructed and given, especially the “heel-to-toe” and “one-legged stand” exercises, but these flaws did not matter, if the defense position was that the driver did not know that he was on the highway, behind the wheel.

After a lengthy motion hearing, where all three Cobb County police officers testified, briefs were submitted to the Judge on the various legal issues. Because the Cobb County police error was caught on video, Mr. Head was able to get the Cobb State Court Judge to rule in favor of the defense, and the accused man’s incriminating blood test results were excluded. Without the blood test result, the State’s drunk driving case against the accused man was severely weakened.

After 18 months of negotiations, motions hearings, court rulings and court rescheduling, the State prosecutor agreed to a compromise, which was offered by Mr. Head. From facing three DUI charges: DUI-alcohol less safe, a DUI-alcohol per se, and a DUI-drugs This led to the Prosecutor agreeing for resolving the DUI case with DUI reduced to reckless driving. No jail time was imposed, and probation was ordered.

Call today for your FREE Lawyer Consultation with our DUI law firm.

Cobb County DUI lawyer William C. (Bubba) Head has received awards for national and State leadership in the field of DUI defense. Mr. Head has also been named as an honoree from multiple organizations, including EVERY Super Lawyers list in Georgia. All three partners, William Head, Larry Kohn and Cory Yager, were selected by Super Lawyers for 2017. Call 404-567-5515 to talk to a lawyer at Mr. Head’s office about your pending drunk driving or drugged driving case. 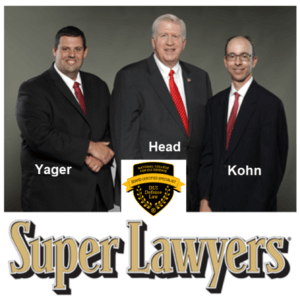 Mr. Head’s Board Certification in DUI Defense Plus Other Recognitions

Of more than 35,000 licensed Georgia attorneys, only 4 DUI lawyers in the State have achieved Board Certification through the National College for DUI Defense. Atlanta DUI lawyer Bubba Head is of those 4 DUI attorneys. NCDD.com

Mr. Head also has twice been named DUI Lawyer of the Year, by Best Lawyers in America, for Atlanta DUI attorneys. Those badges are shown above.