Bubba Head, an Atlanta DUI lawyer. was hired by a divorced, working mother of three teenage children. Client was stopped at a safety checkpoint (roadblock) in Johns Creek, GA. Because the Client’s breathalyzer test showed a blood alcohol concentration BAC well over the legal limit [0.227 and 0.235], Mr. Head focused on challenging the legality of the Johns Creek police checkpoint. Other issues about the voluntariness of the implied consent tests and the propriety of the field sobriety test [HGN] were also filed, but the DUI checkpoint motion (if granted) would result in a total dismissal of the case. Mr. Head was trying to argue that the roadblock was set up illegally, or was staffed illegally. We don’t see as many check pints as we did 10 years ago. Police departments have cut back on these unannounced events due to budget constraints. But to be legally valid a sobriety road block must be pre-planned out by a police supervisor to include location, duration, and safety features like orange cones or lighting. The roadblock can not be set up where it will cause undue delays or an accident. It cannot be just around a corner. You cannot turn around to avoid these police checkpoints. A chaser call will track you down. 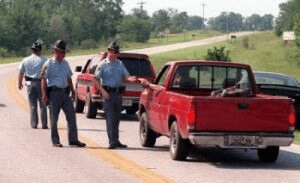 While at a DUI roadblock, you will be asked for your driver’ license and proof of insurance. You always should have your wallet, purse, and the items requested at your fingertips. You should tell the officer what you are about to do before you make a move.

Trial Judge Refuses to Rule That the Checkpoint Was Illegal

The trial judge refused to rule that the DUI checkpoints established by the police officers at Johns Creek on July 3, 2011 and July 4, 2011 were illegal. Other Fulton State Court judges, who were asked to review the constitutionality of the DUI checkpoints on the July 4th holiday set up by Johns Creek police had thrown out other cases. So, Mr. Head advised Client to permit him to stipulate to a bench trial, based upon the evidence from the pre-trial motion hearing on the constitutional legality of the July 4, 2011 roadblock, to set up an appeal to the Georgia Court of Appeals.  This is what was done to position the case for an appellate victory, since Mr. Head was convinced that the police checkpoint was illegally established. A bench trial means that there is no jury – only a judge decides guilt or innocence. Sometimes in cases like these your attorney will have a better outcome if only a judge presides and decides.

Your DUI lawyer will try all legal means to get you a favorable outcome in court. He will file pre-trial motions with the courtroom clerk where your trial is taking place. If a city is large enough it will have a municipal court, for example Marietta Municipal Court, Alpharetta Municipal Court, and Sandy Springs Municipal Court. In each court you have the right to request a trial by a jury of 6 of your peers. Full jury trials in DUI cases are still rare with less than 5% of all cases going to trial. But if you are looking for the best DUI lawyer in town you want to ensure this lawyer has trial experience, and not just one trial from 10 years ago.

It also helps if the attorney you may hire knows all the courtroom staff like the clerk and the prosecutors, an\d t\he security person. If they all say hello then this means they have mutual respect for each other. That is a promising sign. If you are actively interviewing criminal defense lawyers you can even attend a court date or two when you are not due in court. At that point you are observing as many lawyers as you can. If one or two impress you then see if you can get their name, or find them outside the courtroom. Please do not come up to us if we are actively with another client, or with the judge or prosecutor.

A criminal charge is a very serious matter and you should try to minimize the chance of being found guilty. A guilty plea stays on your criminal background check for life which means all future employers will find out about it. Car rental agencies may not rent you a car, which is an embarrassing work scenario.

On May 15, 2015, the Georgia Court of Appeals reversed the trial judge, and ruled that the State Court of Fulton County trial judge erred in her earlier ruling on the DUI roadblock, and that Atlanta criminal defense attorney Bubba Head was correct about the DUI checkpoint illegality. This ruling meant that the case was remanded back to the Fulton County State Court judge, and her previous ruling was vacated (withdrawn) and a new ruling was entered that totally acquitted our Client.

A lot of people, especially first-time-been-arrested people, simply go into a courtroom by themselves, without a criminal defense lawyer standing next to them facing the judge, and plead guilty to all charges. They then start feeling the pain of conviction: the high court fines, reporting to a probation officer, attending a week-long DUI school, riding over to community service, and talking to an alcohol and drug addiction counselor.

We Have Many Ways to Fight a DUI

If you have been stopped at a DUI checkpoint in Georgia, contact Bubba Head for a FREE consultation about your legal rights under Georgia DUI laws, and a review of the applicable sobriety checkpoint written guidelines and the implementation of the warrantless search made at your DUI checkpoint. In addition to the roadblock being set up illegally, Mr. Head can also challenge the accuracy of the breath test machine and its calibration, or see if the arresting officer read you the implied consent warning. Call Bubba Head at his Atlanta DUI law firm, 1-888-DUI-HEAD, or 1-888-384-4323.

All meetings can be virtual but of course you have to appear in court at least once. All courtrooms adhere to the CDC guidelines for stopping the spread of Covid-19. All four of our Atlanta criminal law firm locations are open for in-person consultations.